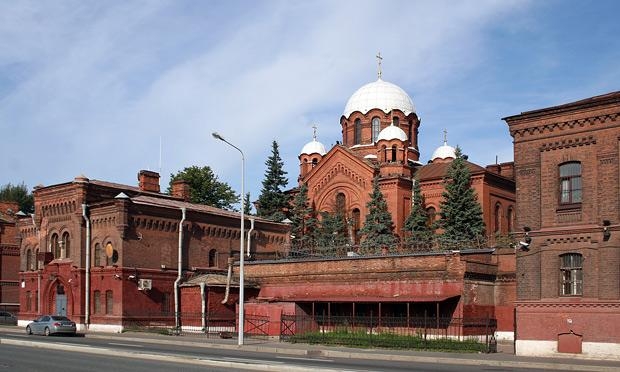 Until December 2017, there was a remand center, one of the most famous and large in Russia.

At the beginning of the XVIII century on the Arsenal embankment was located brewery. Then, at the time of Anna Ioannovna, wine cellars were built in its place, the so-called "Wine Town", where the wine stores of the whole city were kept. In 1867 the warehouses were rebuilt according to the project of architect Vladislav Lvov, director of the St. Petersburg Prison Committee: a criminal prison was established here that existed until 1886.

The current building was built in 1884-1889 by architect Antonia Tomishko. Those were two five-story buildings, cross-shaped in the plan, their shape defined the name.

The complex was set up as a single prison. It included two prison cell buildings for 960 cameras, mostly single, an administrative building with the church of St. Alexander Nevsky, houses for forwarders, a kitchen with a bakery, five hospital buildings, a sauna, a boiler room with an electric generator, a glacier, a smithy - altogether 20 buildings. In the prison, there was electric lighting, a water supply system, ventilation and water heating. At that time, according to the Chief Prison Administration, it was the most exemplary prison in Europe

The "Crosses" contained criminals and political prisoners. Among the most famous prisoners were Narodnaya Volya - Lev Trotsky, Anatoly Lunacharsky. During the February Revolution of 1917, the insurgents liberated all prisoners, and in October of the same year, the Bolsheviks concluded here the entire Provisional Government, except for the Kerensky who managed to escape.

Since 1964, "Crosses" have become an investigatory isolator number 1, here were the suspects and accused of committing crimes before the verdict of the court. The living conditions have deteriorated greatly: by the end of the 20th century, the SIZO contained far more suspects than was planned during the construction of the prison. In the cells of 8 square meters, designed for 6 people, up to 20 people were kept, so they had to take turns to sleep.

In the 21st century, it was decided to move the prison to a new location. For the "Crosses" a new building was built in Kolpino near St. Petersburg, and by December 2017 the last prisoner had left from here. In the future, it is planned to create a museum in the building.