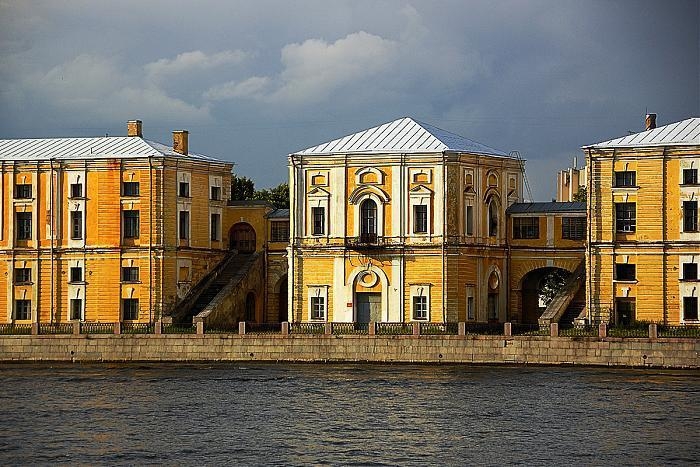 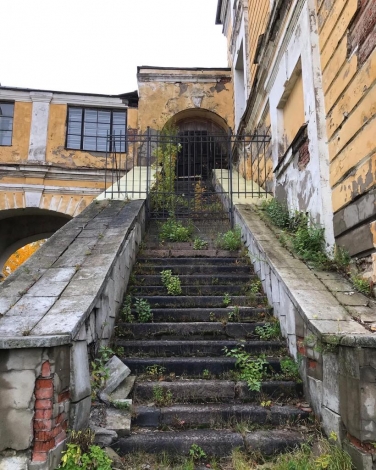 Tuchkov Buyan is a monument of Petersburg architecture of early classicism, the former stump warehouse building, built in the second half of the 18th century on an island of the same name in the channel of the Malaya Neva.

The island arose after the flood of 1726. At that time it was simply called Buyan, then Penkov Buyan, and after the construction of the floating Tuchkov Bridge in 1758, which received the name in honor of the merchant-contractor Avram Tuchkov who built it, the island was given the name Tuchkov Buyan.

In 1735, wooden stump storages were built on the island. In 1761 they burned down, and in 1763-1972 they built a long stone building in their place according to the design of Antonio Rinaldi.

On the sides of the central two-story building, it’s important (stump weighing rooms), rectangular barns that are connected to important covered galleries are symmetrically located. The balcony is more importantly decorated with a forged iron grate, also designed by Rinaldi.

In the 19th century, the warehouse building was mistakenly called the “Biron Palace”, this name appears in official documents until 1908, when genuine drawings of stump barns were found in the preparation of the Historical Exhibition.

At the beginning of the 20th century, the channels between the Buyan, neighboring nameless islets and Petrograd Island were filled up, and the name Tuchkov Buyan was transferred to a new urban area, limited by modern Dobrolyubov Avenue from the north, Tuchkova Dam Street from the west, Birzhevoy Bridge from the east and Little Neva from the south. This quarter was supposed to be a museum and exhibition complex, but the project did not take place due to the outbreak of the First World War.

Today, the Yubileiny sports complex and the Sportivnaya metro station are located here, and in the eastern part, now fenced, it is planned to create a modern art park Tuchkov Buyan.