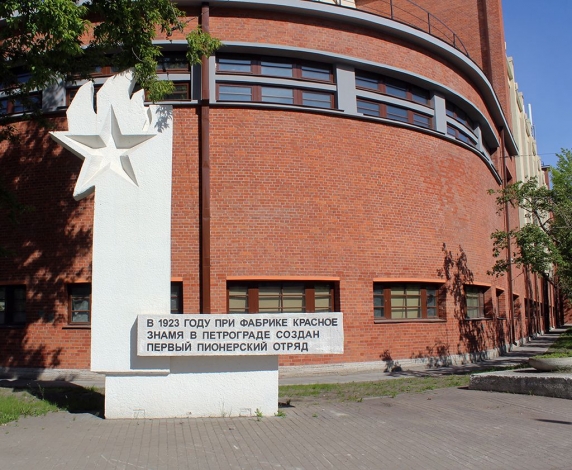 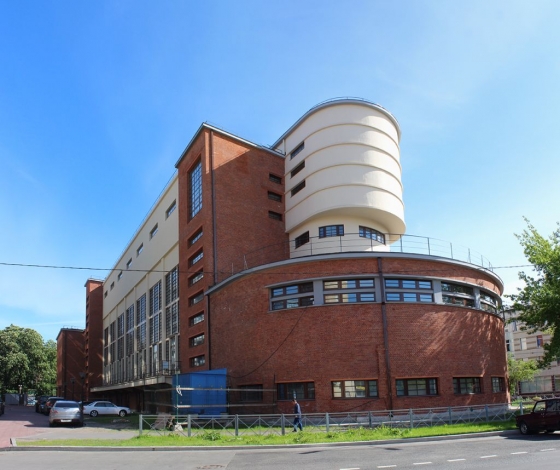 The power station of the Red Flag Knitting Factory is a bright monument of industrial architecture of the constructivist era. The building was erected in 1925 according to the design of the German architect Erich Mendelsohn, who was invited to the USSR to develop a project for the reconstruction of the entire factory.

The history of the company begins in the second half of the XIX century. The factory of hosiery Kerstner was the largest knitwear company in Russia.

In the 1920s, the Soviet government decided to rebuild the factory and create an exemplary socialist enterprise on its basis. To this end, an architect from Germany, Erich Mendelsohn, was invited to Leningrad, who drafted a preliminary project in the style of constructivism. The power station located at the corner became the dominant feature of the complex, which occupies the whole block according to the plan. The architect metaphorically likened this structure to a “ship that pulls all production behind it”.

The second vertical accent was to be a rectangular tower plant management. Three workshops inside the courtyard were designed with high superstructures of trapezoidal section - ventilation shafts. On three sides of the quarter were planned four-storey industrial buildings with a reinforced concrete frame, brick cladding and horizontal glazing strips.

However, German specialists had disagreements with Soviet architects, as a result of which the project was considerably simplified, and only the power station was erected in its original form. It consists of three parts: the central office - the boiler room, the turbine hall and the water treatment department. The sharp differences in the shapes and sizes of the individual elements of the design of the openings are due to the technological features of the compartments. An expressive silhouette, where plastic rounded volumes, embedded by three tiers into a blank brick end, contrast with a rectangular block, stand out in the perspective of intersecting streets.

In the 1990-2000s, factory production dropped sharply, and the power station building fell into disrepair. In 2017–2018, the facade was restored and its historical appearance was restored.