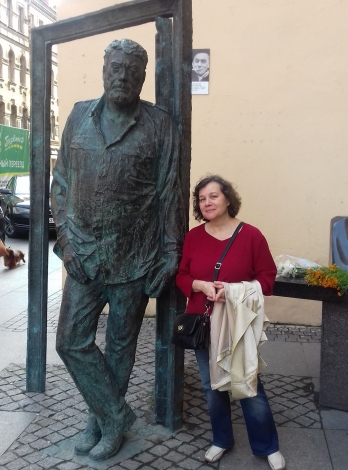 The sculptural composition is dedicated to the memory of Sergei Donatovich Dovlatov (1941-1990). It was installed near the house number 23 on Rubinstein Street, where writer lived for 34 years. The opening of the monument was timed to coincide with the anniversary, on September 3, 2016 Dovlatov would have turned 75 years old.

The monument is made in the form of a bronze figure of the writer, standing in the doorway of the open door.

On the same days, on September 2-4, 2016, a festival was held for the first time in St. Petersburg. It was held in memory of Sergei Dovlatov and his time. Since then it is held annually in September. The program of the festival includes roundtables, creative meetings, poetry readings of the 60s, performances, quests, excursions, film screenings, discos, fairs and a street party on Rubinstein Str., 23.