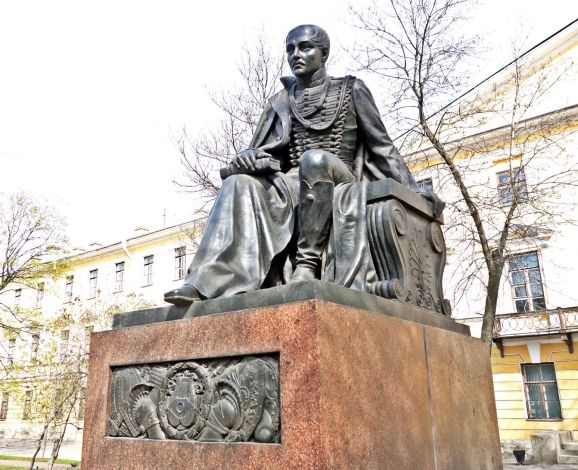 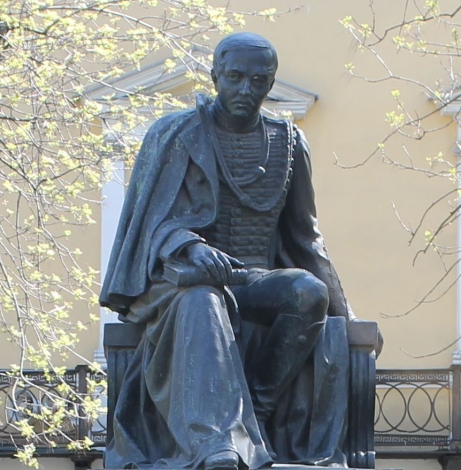 The monument to M. Yu. Lermontov was opened on May 22, 1916 on Novo-Peterhof Avenue in front of the building of the Nikolaev Cavalry School, where the poet studied. The author of the monument is the artist and sculptor Boris Mikeshin.

The initiative to erect a monument to Lermontov in St. Petersburg was made in 1907 by the head of the Nikolaev cavalry school, Major General L.V. De Witt. Funds for its construction were collected by subscription among college graduates, individuals and government agencies.

The ceremony of laying the monument took place on October 1, 1913. A little later, a life-size model was made, which was installed on the site of the future monument.

Boris Mikeshin depicted Lermontov in military uniform sitting in an armchair. An overcoat is draped over his shoulder. On a pedestal of red polished granite there is a bronze bas-relief with armor, a lyre and a wreath. Below it is an inscription in overhead letters: “M. Yu. / Lermontov / 1814-1841 ". Below is the bronze face of a lion. On the reverse side of the pedestal, Lermontov's main works are listed: "Demon", "Angel", "Borodino", "Hero of Our Time", "Song about the merchant Kalashnikov", "Prophet", "Fatherland", "Valerik", "Mtsyri", "Dispute". From the pedestal to the sides, two granite benches extend in a semicircle, ending with pedestals with bronze lamps on lion paws.