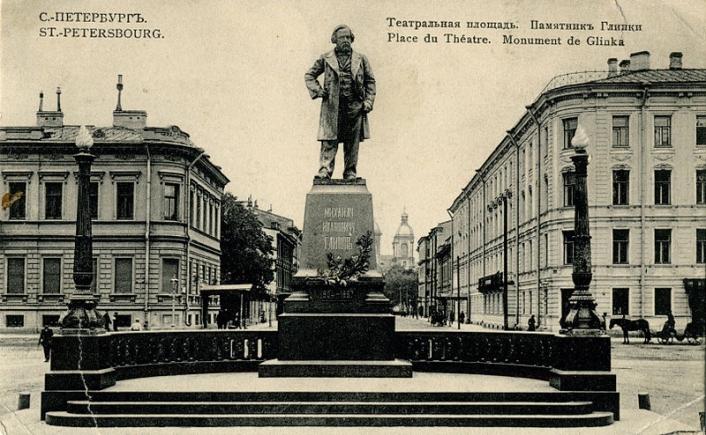 It was decided to erect a monument to the Russian composer Mikhail Ivanovich Glinka by his centenary, which was celebrated in 1904. This initiative was launched in 1901 by the Imperial Russian Musical Society. It announced a competition for the creation of the monument and the all-Russian collection of donations. For a short period of time, we managed to raise about 107 thousand rubles, including through charity performances and concerts.

The design of the monument was developed by two brothers - sculptor Robert Bach and architect Alexander Bach. A bronze statue 3.5 meters high is placed on a red granite pedestal, the total height of the monument is 7.5 meters.

The monument was inaugurated on February 3, 1906. The composer is depicted in full length: a light coat flutters, one hand is in his trouser pocket, his face is pensive, his eyes are focused. He is clearly attentively listening to a new musical piece. On the polished faces of the pedestal are inscriptions made in gilded letters: the dates of the life and death of the composer, the names of his most famous musical works. The sculpture is surrounded by a small platform of the same red polished granite. Until 1926, it was decorated with two bronze candelabra.

Initially, the monument stood at the intersection of Theater Square and Glinka Street. However, it soon became clear that the place was chosen poorly: the monument interfered with street traffic. In 1926, during the reconstruction of the square, the monument was dismantled, and then moved to a new place, south of the building of the Conservatory, where it is located to this day. Candelabra were recognized as superfluous - they did not begin to be restored.