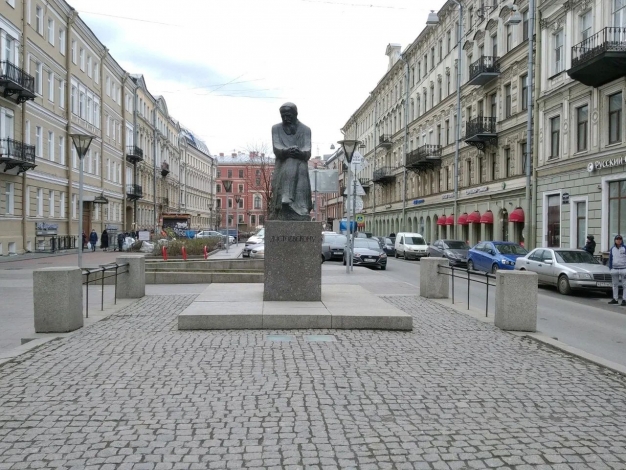 The first sketch of the monument was presented by Lyubov Mikhailovna Kholina in 1956, but the monument appeared only 40 years later. Such a long period of time is connected to the fact that during the Soviet era, Dostoevsky was considered a "reactionary" writer.

Competition for the development of the project of the monument to Dostoevsky was announced in 1988. L.M. Holina and architect V.A. Petrov won, but it was demanded from the authors to change the granite sculpture to the bronze one. Necessary changes to the project were made in 1993 - 1994, with involving the son and grandson of L.M. Kholina - artist Peter Alexandrovich and sculptor Pavel Petrovich Ignatiev.

The bronze "under the stone" figure of Dostoevsky depicted seated; on the face hard work of thought is reflected. The writer's gaze is addressed to the church of Vladimirskoy Mother of God.

Initially, L.M. Kholina proposed to install a monument in the place where the canal Griboyedov falls into Kryukov canal, where the heroes of "White Nights" met. However, another place was chosen - not far from Dostoevsky's apartment, where he lived in 1878-1881, and where today the writer's apartment-museum is located.

On every first Saturday of July at the foot of the monument, the Days of Dostoevsky are opened in St. Petersburg.