Square at the intersection of Bolshoi pr. V.O. and 26 line of V.O. 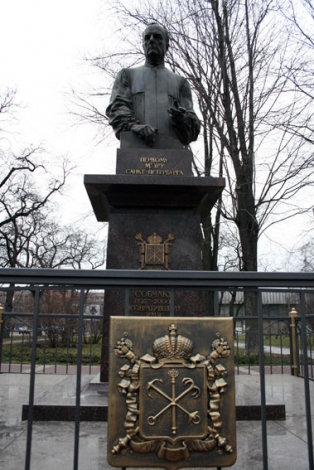 The monument to the first and only mayor of St. Petersburg, Anatoly Alexandrovich Sobchak, was erected in the square at the intersection of Bolshoi pr. V.O. and 26 line of V.O. in June 2006. The authors of the monument are sculptor Ivan Korneev and architect Vyacheslav Bukhayev.

The waist figure of Anatoly Sobchak is depicted in the mantle of an honorary doctor, speaking on the podium. With his right hand he rests on the podium, left, free, stretched forward.

On the front side of the pedestal of the inscription (false bronze letters): “To the first mayor of St. Petersburg”; "Anatoly Alexandrovich Sobchak (1937 - 2000), who returned the name of the city", as well as an overhead image of the coat of arms of St. Petersburg.

The sponsor and curator of the installation of the monument was the Anatoly Sobchak Foundation, led by his widow Lyudmila Narusova.