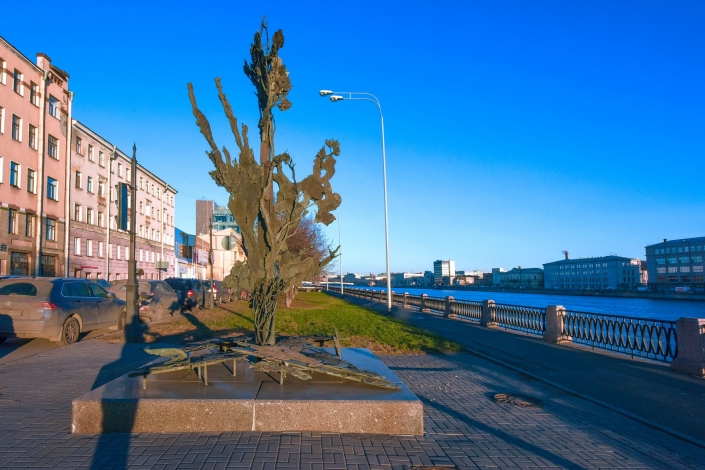 The dynasty of Nobel industrialists left a notable mark in the Russian economy. Military equipment, steam engines, metal structures, machine tools were produced in their factories, starting from 1838. From all of the dynasty, Alfred Nobel was especially famous, he owns an invention of dynamite.

Nobel has accumulated a huge fortune, which he wished to use in an unusual way. He established a prize, which should be given to scientists for outstanding discoveries. The first Nobel Prize was awarded in 1901.

90 years later on the initiative of the Nobel Foundation and the International Fund of the History of Science in St. Petersburg a monument to Alfred Nobel was built. The Nobel family that arrived from Stockholm in 1842 settled here, at the Petrogradskaya Embankment, 24.

The composition of the sculpture depicts a fantastic tree of life with twisted branches after the explosion. The explosion is peaceful, the dove in composition shows it. There is an inscription with the surname of the scientist and years of his life: 1833-1896 on the granite pedestal.