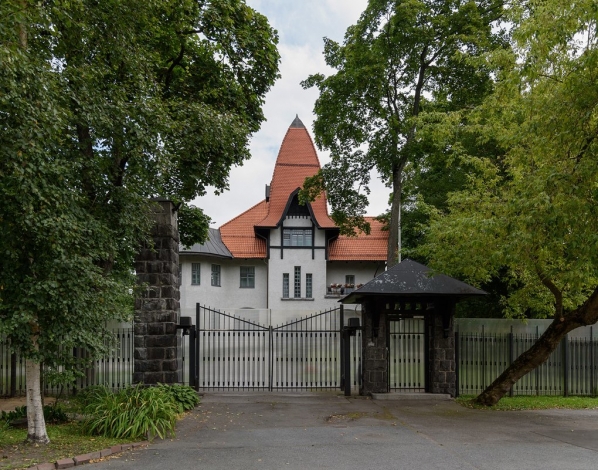 A two-story mansion of a Swiss citizen, the head of a tailor's workshop, E.G. Follenweider was built in 1904-1905 in the spirit of northern Art Nouveau with neo-Gothic elements. Its author is the architect Robert-Friedrich Meltzer.

The building belongs to the earliest and most striking examples of the Northern Art Nouveau style in St. Petersburg. This version of the new style has developed largely under the influence of the national romanticism of Finland and Scandinavia. It is distinguished by monumental laconic volumes, a massive tower with a curved tent, the white surface of the walls, shaded by gray granite basement and red roof tiles.

The image of the house is full of plastic expression and fanned with a romantic spirit. A free, asymmetric, picturesque composition is distinguished by the dynamics of masses, smooth or contrasting joints of parts and elements. The building is as if molded from large volumes of different shapes and heights. Each facade is solved in its own way. The deliberately complicated silhouette is dominated by a traditional tower. The windows, various in design and grouping, show outside the features of the mansion’s internal structure.

On the first floor of the house there was an office, living room, dining room and kitchen, on the second - a library, children's rooms and a bedroom with a boudoir. Fragmentally preserved interior decoration: ornamental molding, stoves and marble fireplaces with mirrors. A grand staircase is enclosed in the tower - a dynamic spiral of its light marches is bordered by a lattice with a geometrized floral pattern.

The appearance of the building evokes associations with ancient castles and at the same time embodies the bold innovations of Art Nouveau. Movie fans remember this mansion in the films “The Adventures of Prince Florizel” and “Mr. Designer.”