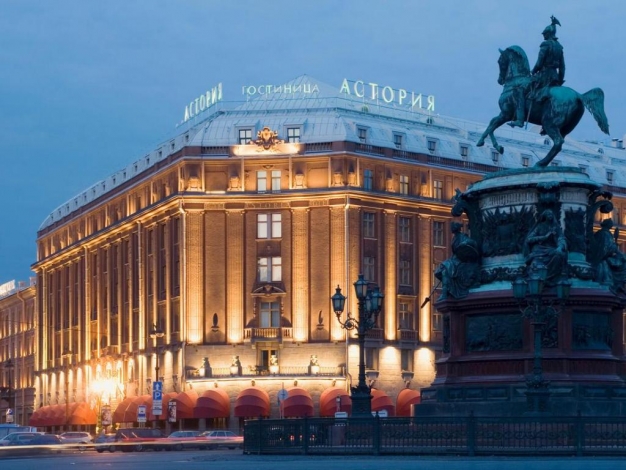 On this place at the end of the XIX century stood the mansion of Prince A. Lvov. At the beginning of the 20th century, the site with the house was acquired by the British joint-stock company Palace-Hotel with the intention of building a hotel with expensive rooms here.

The hotel building was built in 1911-1912 according to the project of the famous St. Petersburg architect F. I. Lidval, and the name was received in memory of the fashionable New York hotels owned by Astor's cousins.

On December 23, 1912, the official opening of the hotel happened. The six-story building is visually divided into three tiers: the two lower floors, faced with granite, look like the base of the hotel, the middle floors are plastered under a stone, the top floor separated by a cornice is decorated with vases.

From the first days of its existence, Astoria acquired the reputation of the most comfortable hotel in St. Petersburg and one of the best in Europe. At the beginning of the XX century, it was designed for 350 people and had a winter garden, a superbly equipped kitchen, restaurants, cafes, banquet rooms, a library, wonderful rooms. In different periods, various famous politicians, artists, writers, including Herbert Wells, stayed at this hotel.

Today Astoria is one of the five best five-star hotels in the world.