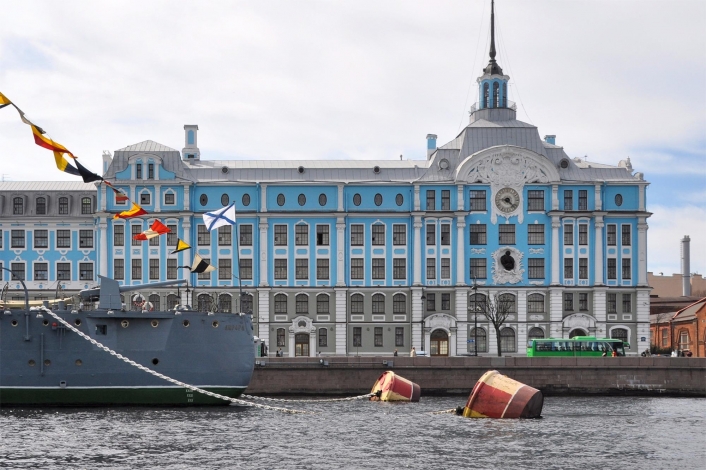 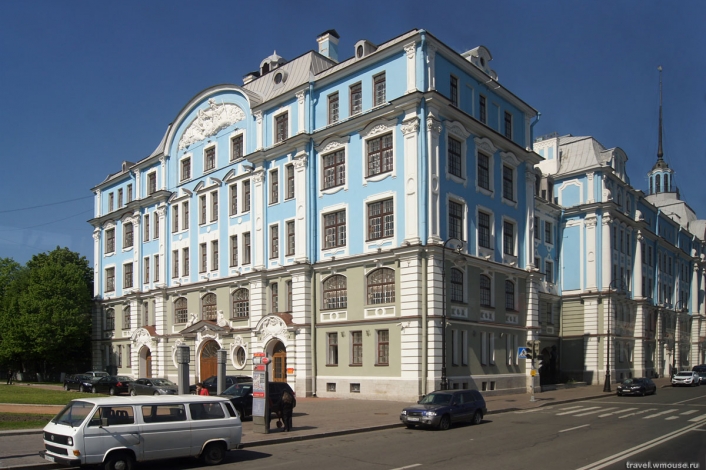 The building was erected for the City School of Peter the Great.

The idea of the building of the school was timed to coincide with the 200th anniversary of St. Petersburg. In May 1903, the first stone of the future building was solemnly laid on the territory of the Gagarin Buoyant near the house of Peter the Great. After summing up the results of the competition of projects, in 1909, the building was laid again, in a new place, on the bank of the Big Nevka, and its construction began. In 1910, the first lessons began in the house, but the complete construction work ended in 1912.

The shape of the schoolhouse was made in the architectural style of a retrospective, a style based on the architecture of past centuries. Therefore, the building copies many elements of Peter's Baroque stylistics: a high spire with a ship, a roof with a fracture, window bindings, a two-tone color. According to the sketches of the artist A.N. Benoit, sculptural groups of Atlanteans on the pediment of the main facade and a large clock-stained glass of the firm "Friedrich Winter" were made. The facade facing the Neva is decorated with a high relief with the Roman goddess Minerva - patroness of arts and crafts.

The interiors of the building also repeat the style of the Petrine Baroque, for example, the Assembly Hall is decorated with panels of painted tiles in the style of the XVIII century with drawings of sea battle scenes.

In 1944, the City School of St. Peter the Great was given to Nakhimov Naval School.