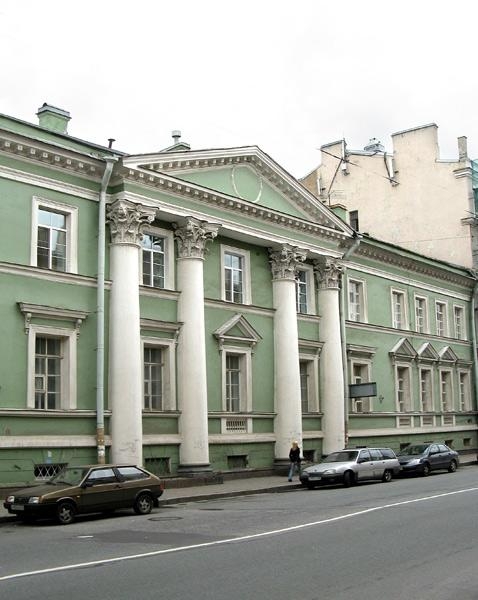 The building of the main pharmacy, which gave the name Aptekarsky Lane, is one of the most striking architectural monuments of classicism.

The court pharmacy was organized by Peter I in 1704 and was originally located in the Peter and Paul Fortress. In 1712, the Aptekarsky order was transferred to St. Petersburg, which was renamed the Chancellery of the Main Pharmacy. A building was erected for it in the Greek settlement - where now Millionaya street passes.

At the beginning of the XVIII century in this place the house of the apothecary Leecens stood. In 1722, according to the Domenico Trezzini project, a stone building of the Main Pharmacy was built here, and the Pharmacy Square appeared. In the 1770s, the lane adjoining this place to Millionnaya Street was named like that.

Since 1731, the new institution was called the Imperial Chief Pharmacy. It was a very influential and rich department, for example, it is known that porcelain dishes were brought here from China. At the same time, drugs were sold to everyone in the Main Pharmacy. They were prepared from the herbs of the Aptekarsky garden - now the Botanical Garden.

The first building of the pharmacy suffered twice from fires - in 1735 and 1737. By the end of the 18th century, it had decayed a lot and in 1789-1796 a new pharmacy was built here, designed by Giacomo Quarenghi. The architectural appearance of the building has survived to the present day. The main facade overlooking the Millionnaya street is decorated with four Corinthian half-columns and a triangular pediment, and the side facade along the Aptekarsky lane is four pilasters and a pediment.

Since 1839, the pharmacy was transferred to a new building at 66 Nevsky Prospekt, and apartments of the Pavlovsky regiment's officers were located in the former pharmacy building. They were in this building until 1917. Today it is an apartment house.