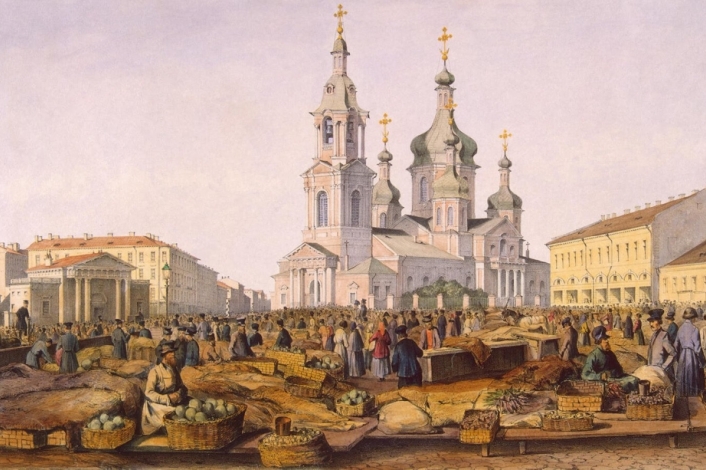 The monumental pavilion with a four-columned portico retained its historical architectural appearance. It was a single ensemble with the now-lost Church of the Savior on Sennaya, the entrance to which was decorated with the same columns.

In the guardhouse building was a military guard. This is the only structure preserved in St. Petersburg, typical for the outposts and "guardhouses" of the beginning of the XIX century. And it was in this building in March 1874 that F.M. Dostoevsky spent several days under the arrest. Being the editor of the magazine "Grazhdanin", he made political mistakes in the note about the stay of Kirghiz deputies in St.Petersburg and was arrested for violating the censorship statute.

In 1886, the building housed the city's sanitary laboratory, where the products brought to the Sennaya market were subjected to analysis. Before the First World War, there was a perfume and drug store, after the revolution the laboratory of the Sanitary Department of the Commissariat of Health was there. From 1957 to 1987, there was a bus station, then a terrarium.

Now in the building of the guardhouse is the "City Tourist Information Bureau", where you can get a verbal reference and free information materials, and visit the exhibition.