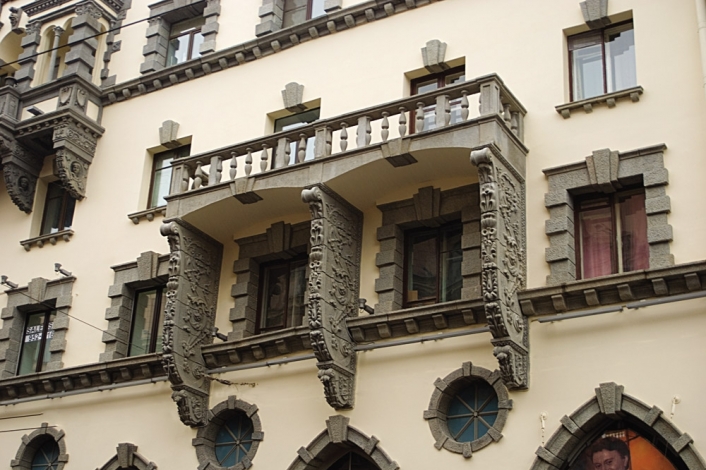 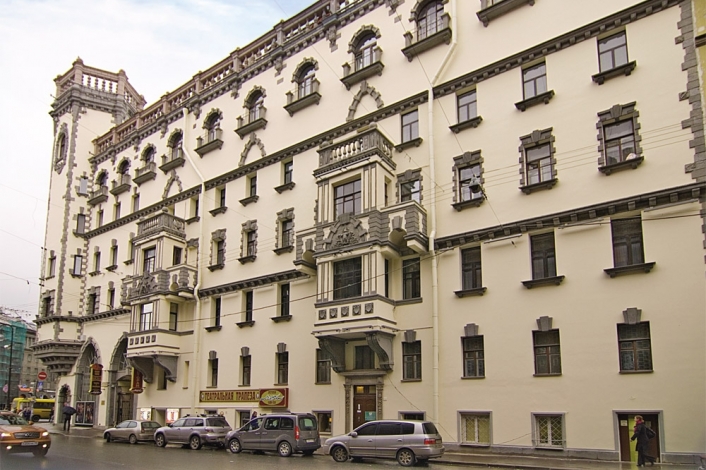 The house, which looks like a medieval English castle, is situated on Leo Tolstoy Square and stands out with two powerful hexagonal bay-window towers.

The appearance of the building combined several architectural styles from neo-Renaissance to Neo-Gothic. One of the bay-towers is decorated with a dial with the signs of the Zodiac. The building itself is richly decorated with balconies, windows and arches, and very diverse: round, semicircular, rectangular and pointed. From the side of Leo Tolstoy Street, the windows of the third and fifth floors are somewhat shifted in relation to other floors.

Thanks to the original appearance, the house with the towers became the dominant not only of Bolshoy Prospekt and Lev Tolstoy Square but of the entire Petrograd side.

The house with the towers was made to the highest engineering standards - with solid construction elements and advanced equipment: gas stoves, bathtubs, and air-heaters. The stock of the strength of the house came in handy during the Leningrad blockade when a powerful mine exploded nearby, but strong beams did not allow the building to collapse - it only slightly squinted.

The first floor of the house with towers was occupied by a cinema for a long time, then there was a television studio until the theater company moved into the room. Today, the first floor is occupied by the St. Petersburg Theater "Russian Entreprise" named after actor Andrei Mironov. Interestingly, the purchase of a part of this house, shortly before the revolution, was acquired by Andrei Mironov's grandfather - Simon Menaker.