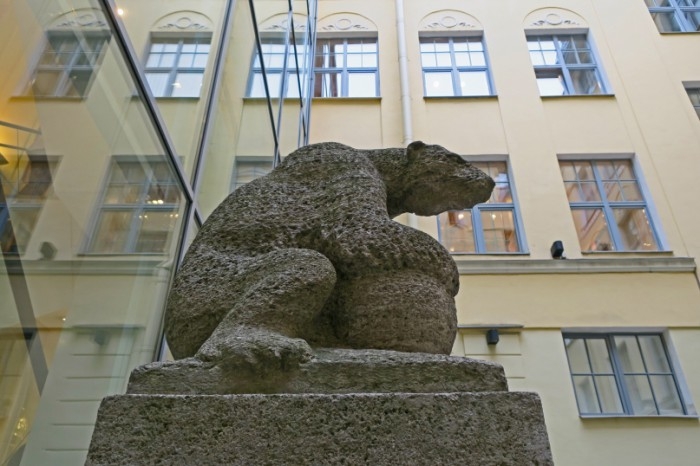 Mertens Trade House is a monument of architecture, the style of which is a mixture of Art Nouveau and neoclassicism.

The first building on this site was built in the 1740s, then rebuilt and finally demolished. In 1911-1912, the architect M.S. Lyalevich erected here a building of the trading house for the fur company of F.L. Mertens. When designing the building, a completely new engineering solution was applied - a monolithic reinforced concrete structure of the building. The facade is decorated with three huge glazed arches-show-windows in height on four floors.

In the courtyard of the house, Mertens has its own attraction: a white stone figure of the bear. Now the bear has acquired a gray color, but, according to legend, it was still white during the blockade. The sculpture was installed in the 1910s by the order of the owner of the trading house - the bear was the emblem of fur products of the company Mertens.

In 1944 the first in Leningrad House of fashion models was opened in the building. In the middle of 2008 the building was restored, now there is a clothing store Zara.