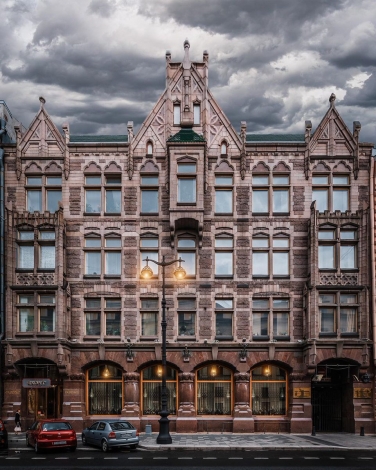 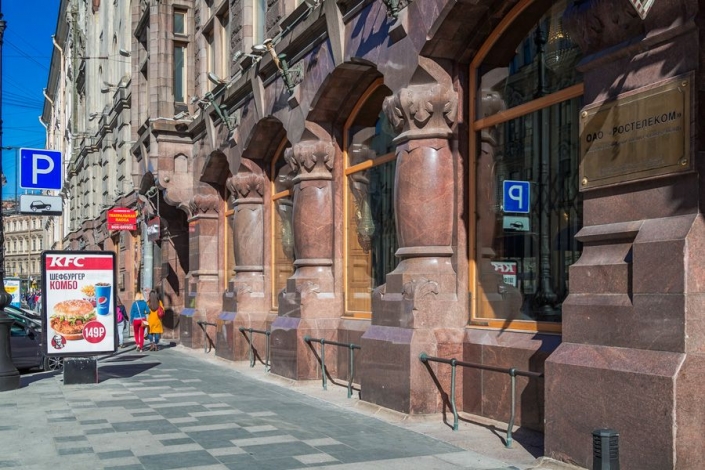 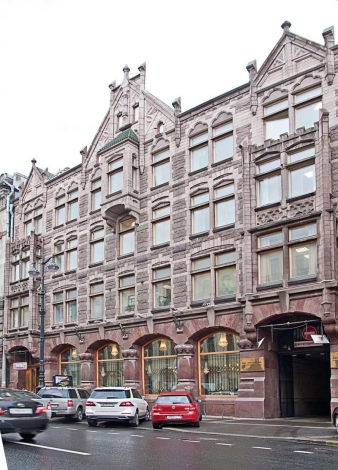 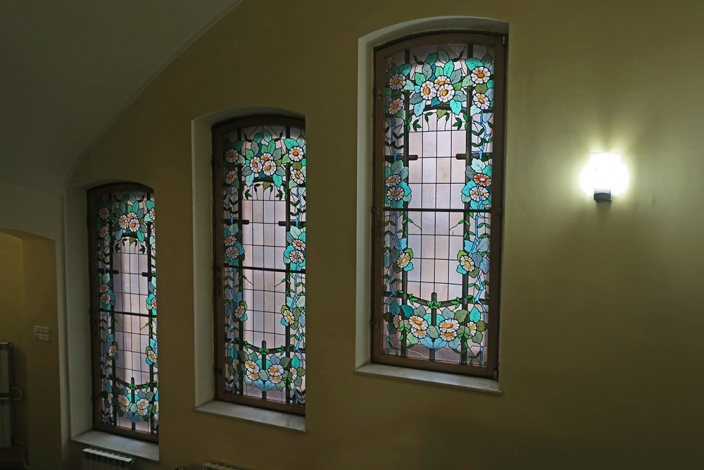 The Art Nouveau building with neo-Gothic elements was built in 1899-1900 for Karl Gustavovich Faberge, the founder of the famous dynasty of jewelers.

The first owner of this site in the XVIII century was the bell master Christopher Ferster, who was accepted into the service of Peter I for playing the bells on the clock on the Spitz of the Peter and Paul Fortress.

For more than 50 years, from the middle of the 18th century, the house belonged to the Ador family, to which goldsmith I. Ardor belonged. In the early 1830s, the owner of the house was another jeweler, the Englishman Duvell, and in the second half of the 1830s there was a bookstore of the bookseller Luke Dixon, from whom Pushkin bought foreign books.

At the end of the XIX century, the owner of the site was Major General Zolotov. In 1898, the land was bought by Carl Faberge. The design of the new building was developed by the architect Karl Schmidt, the son of a cousin of the jeweler.

The main facade of the building stands out among various works of architecture on one of the most fashionable streets of the Northern capital. The heavy semi-columns of the arcade of the first floor of polished red granite emphasize the Gothic lightness and aspiration up the facade of the next floors, faced with gray-pink granite, with large planes of windows filled with mirror glass. The facade ends with triangular spitz pediments.

A store of gold and diamond items was placed on the ground floor of the new house; workshops equipped with the latest technology of the time were set up on the other floors and in the courtyard outbuildings. The workshops of Mikhail Perkhin, Henryk Wigstrom and other outstanding workshops of the company moved here. On the top floor there was an art studio where graduates of the Baron Stieglitz School of Technical Drawing, headed by Francois Birbaum, worked. Here was the apartment of Carl Faberge himself.

The main entrance to the main staircase is located at the end of the western wing. Having passed through the gates of the front wing, under the archway, the walls of which are lined with white and light green ceramic tiles. The main staircase, preserved almost unchanged, is illuminated by three tiers of windows with stained-glass windows in oak binders. In the lower two tiers among the green-blue foliage are white flowers curling along trellises.

Stained glass fillings of the third, highest tier depict the sky with light pinkish clouds. The stairs are made of limestone slabs, the areas are lined with colored ceramic tiles of complex patterns, the stair railings are forged, metal, with an art nouveau pattern. The ceilings of the staircase and areas are decorated with molding.

The decoration of courtyard facades has also been preserved to our time: some of the surfaces are rusticated, some are treated with decorative plaster.

After the revolution, Carl Faberge emigrated to Switzerland. The house was redeveloped, various organizations were located here. Now here on the ground floor there is a jewelry store "Yakhont".