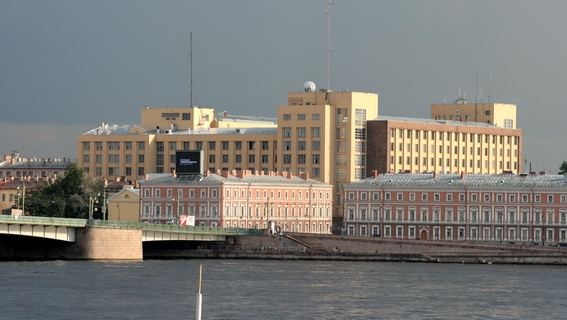 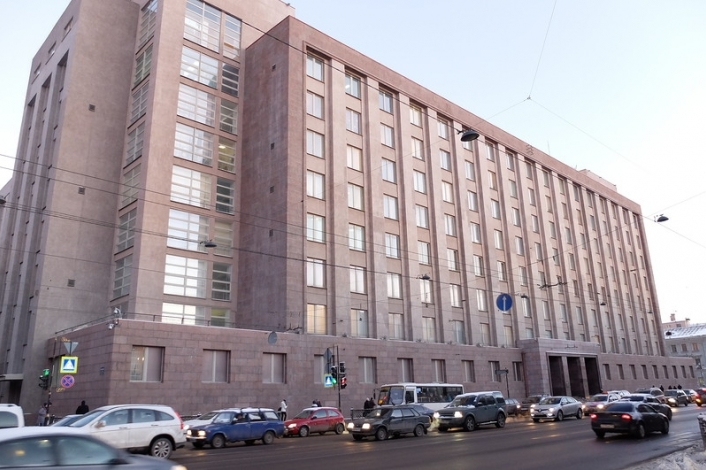 On this place the building of the District Court, built in the XIX century by VI Bazhenov, stood. In February 1917 the District Court was burned. In the early 1930s, an administrative building intended for the OGPU-NKVD was erected in the quarter between the streets of Shpalernaya (then - Voinova Street) and Zakharievskaya (then - Kalyaeva Street). The building was opened on November 7, 1932.

This monument of Soviet architecture, solved in monumental forms of constructivism, became the dominant of the Liteiny Prospekt. The exterior architecture of the building is simple. The main motif of the central facade consists of alternating tall pylons and windows. Their vertical rhythm is combined with a horizontal somewhat weighted first floor, faced with red granite. Corner glazed towers create a contrast with the central and lateral parts.

Interior of the building can be seen only by the employees of the department and those who are not lucky enough to get inside as suspects. We hope that you will not be among them, and therefore we'll talk about the interiors a bit more.

The main façade with the main entrance leads to the Liteiny Prospekt. The architectural and spatial decision of the lobby is repeated in a reduced volume on all the other eight floors. On each floor, there is a small hall with two round pillars lined with artificial black marble. The walls are lined with artificial marble of light gray color with dark veins. Long corridors are illuminated from the ends and stairwells. Along the corridors on both sides, there are offices, finished with oak. Furniture and architectural solutions of interiors form a single ensemble.

The most interesting is the meeting room. Located on the seventh floor, it spans two floors in height. The space of a rectangular in the plan  hall with a balcony is covered with a ribbed reinforced concrete ceiling. The walls are lined with artificial marble of pink color of varying intensity. The balcony guard is made of gray marble. Vertical lateral piers alternate with window openings going from floor to ceiling. Two horizontal stripes of built-in lighting cross the ceiling along its entire length.

Since the days of Stalin's repressions, the "Big House" has been surrounded by gloomy legends. For example, there is a rumor that under the ground the building has as many floors as above it. This legend was fixed in the city folklore in the form of a saying: "The big house on Liteiny is the tallest in the city: Siberia is visible from its cellars."

In fact, the deep foundation pit dug during the construction was filled with reinforced concrete monolith for the stability of the building. The floor of the basement is only 1.8 meters below ground level.