Pskov-Novgorod with elements of Art Nouveau 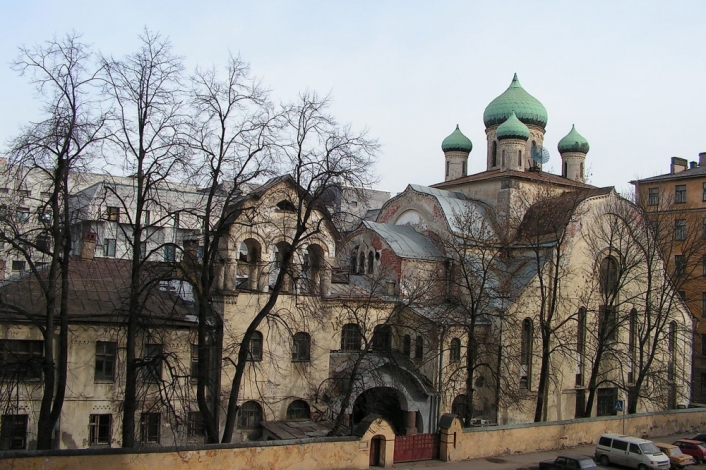 The Church of the Sign of the Sacred Virgin was founded in 1906 and consecrated in 1908. The construction of the church was carried out by the designs and under the supervision of the artist and architect D.A. Kryzhanovskiy.

The church has Pskov-Novgorod features with elements of the modernist style. Copper roof with patina of golden brown color and the facade performed in milky-white color make the church’s architecture especially grandeur. The site is surrounded by a rather blind fence, which makes it resembling a monastery. Crosses and icons are installed over the entrance and at the head of the church. The interior of the church is strict and ascetic: there are walls without painting, an oak parquet, huge doors with glass transoms, and dark bronze lamps.

The church is a unique construction with regard to engineering. It was provided with its own boiler room and steam heating. There are ventilation ducts in the walls, piercing the walls and accumulating heat, which serve as a stove.  There are also mechanically opening sinuses inside the main onion-shaped cupola for ventilation.

In 1999, the Znamenskaya church received the status of a monument of architecture of federal significance.  In 2005 it was transferred to the Nevskaya Old Believers' Pomeranian community. The opening of the Church of the Sign of the Sacred Virgin after the restoration took place in 2007.