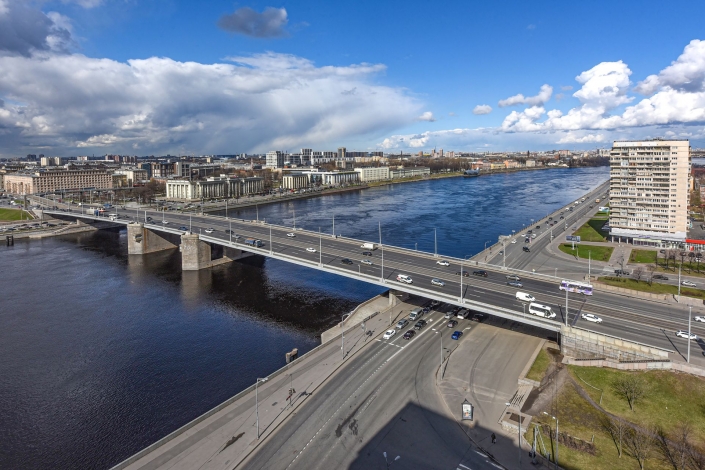 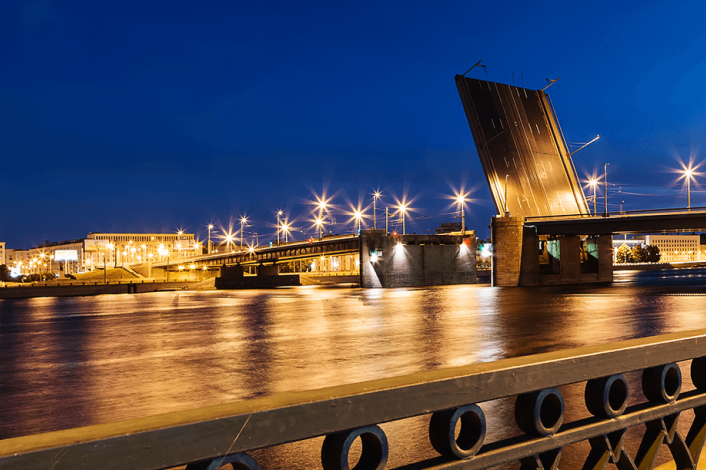 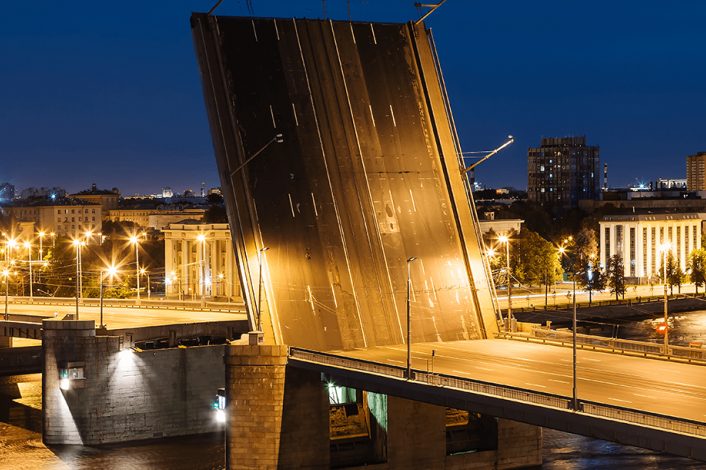 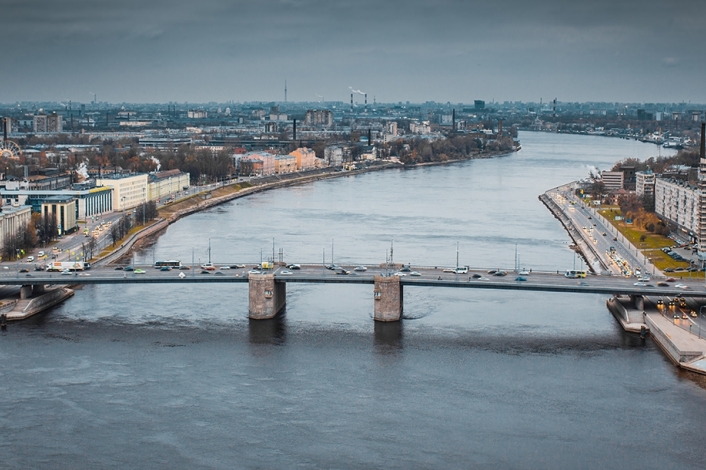 Volodarsky Bridge is located in the alignment of Ivanovskaya Street and Narodnaya Street. The need to build a new fixed bridge at this place was called by Leningrad planning project in the 30s, which provided a significant development of its south-eastern part and upcoming organization of belt highway.

The bridge is named after the revolutionary leader V. Volodarsky who was killed in the place of the future construction of the bridge in 1918. It was the first reinforced concrete bridge across the Neva River. The bridge was built in 1932-1936 under the project of engineers of design department of Lenmosttrest under the guidance of professor G.P. Perederiy, with the participation of architects A.S. Nikolsky and K.M. Dmitriev.

It was a 3-span bridge with reinforced concrete arched fixed structures with the roadway below, metal 2-leaf central bascule span and approach viaducts of transport interchanges on both banks of the Neva River.

Fixed spans represent a flexible arch with intermediate tie; effective span length is of 101.1 m. It was a unique engineering structure of the time.

Arched spans were reinforced by tubular armature linked by spiral winding and filled with concrete; and there were hollow box section ties. This reinforcement was a novelty in bridge construction.

During the Great Patriotic War Volodarsky Bridge was used as an alternate to Finlyand Railways Bridge; and rolling equipment were transferred over it from the left bank of the Neva River to the right one.

The bridge monitoring was performed during the exploitation. The deflection of arch span structures tightening increased for a long time. A process of delamination of protective layer on the arches was intensive. In addition, there was disruption of low-grade concrete with reinforcement in the form of continuous metal pipe linked by spiral winding.

Considering the poor condition and small sizes of Volodarsky Bridge, it was decided to reconstruct it.

In 1988-1993, under the project of engineers A.I. Ketslah, P.M. Stepnov of Lengiprotransmost and architect Y.I. Sinitsa 5-span metal bridge with single-leaf central draw span was built.

Fixed spans were covered by 2-span continuous beams. Each span consists of 2 half-blocks, combined into the overall structure by the upper orthotropic plate and tie beams.

The draw span is an integral full metal structure consisting of 4 main beams combined on top by orthotropic plate with ribs. Single leaf draw span of trunnion bascule system with a fixed axis of rotation, with fixed counterweights. The bridge is raised hydraulically.

Volodarsky Bridge is the only bridge in St. Petersburg with an elevated tram road (the left bank).

Railing of a simple pattern is installed on the bridge. At the entrances to the bridge granite obelisks on pedestals are installed. On the 4 sides of the bridge stair descents are built.