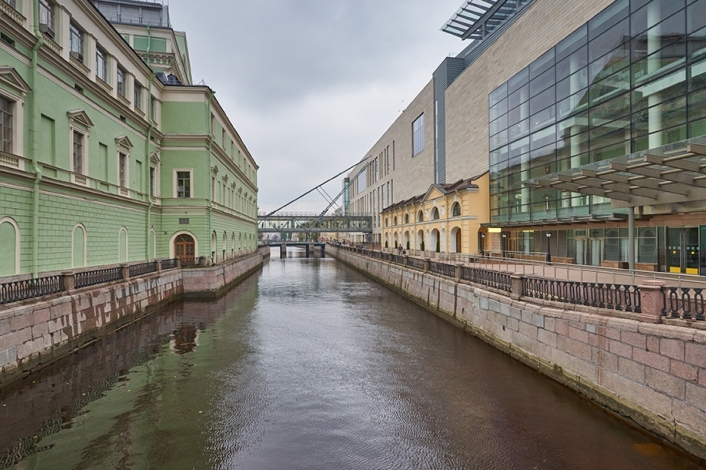 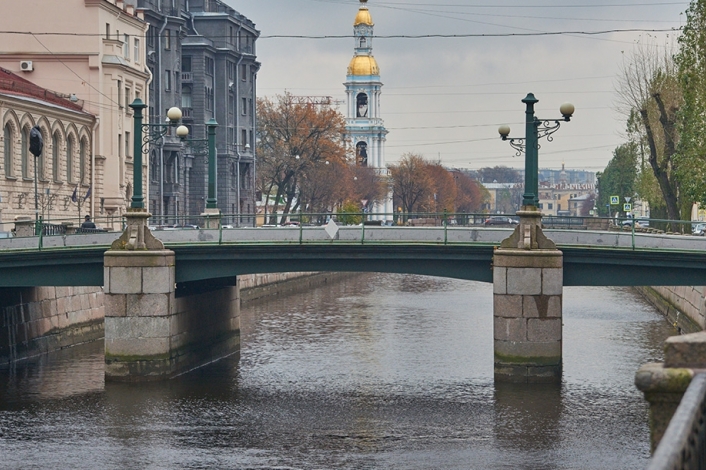 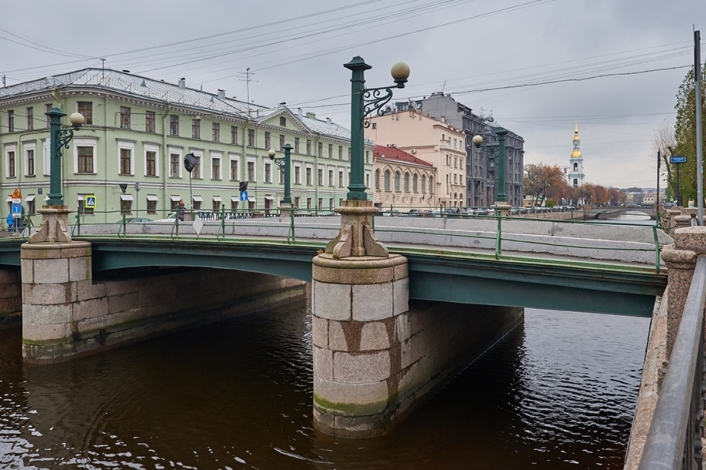 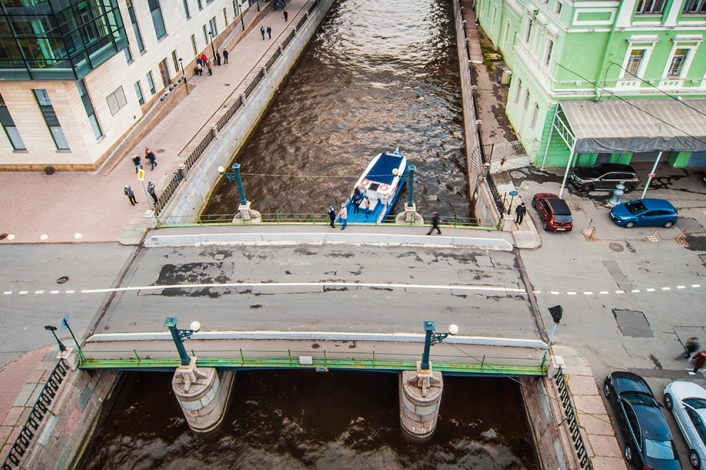 Torgovy Bridge (former Sredny – 1797) is a bridge across the Kryukov Canal in Admiralteysky District; it connects Kolomensky and Kazan Islands; it is located along the axis of Soyuz Pechatnikov Street (former Torgovaya).

The bridge was constructed in 1782-1785, during the period of construction of the granite embankments of the Kryukov Canal. The project author was not established. Torgovy bridge is one six typical bridges across the Kryukov Canal, which had an ancient appearance. Currently, only two bridges, Torgovy and Matveyev, have preserved their historical appearance.

The bridge was three-span wooden bridge. There were stone abutments and supports on pile foundations, faced with granite. On river piers there are granite obelisks, whereon metallic stands with oval lanterns are installed. Railing was metallic and represented two horizontal rods with vertical posts.

In 1805-1810 middle span was replaced with permanent beam-type superstructure.

In 1868 major repair of the bridge took place.

In 1905 wooden girders of the superstructure were replaced by metallic I-shaped beams. Figured granite obelisks with lanterns are also removed from river piers. Then the bridge was repaired several times.

In 1960 the bridge was rebuilt under the project by Lengiproinzhproject’s Engineer A.D. Gutzeit and architect A.L. Rotach. Old metallic superstructures were replaced by new ones. The bridge remained three-span, but simple system. Metallic superstructures have curved shape of the bottom chord. Wooden roadway is replaced by reinforced concrete slab with asphalt concrete pavement. The bridge abutments are made from reinforced concrete, faced with granite, on pile foundation, at one level with embankment wall. Figured granite obelisks with metallic stands and oval lanterns on river piers were restored. The bridge grid is metallic, forged, of simple pattern.

In the course of repair, initial bridge image, typical for the bridges of the Kryukov Canal in 1780s was preserved.

In 1980 low concrete curb was replaced with high granite one.

Nowadays, Torgovy Bridge, together with neighboring Dekabristov Bridge, embrace Mariinsky Theatre from both sides, both in different ends coming to Teatralnaya Square. The gallery of the Kryukov Canal bridges has got a historical value – its appearance, style and architecture refer to the far past of Saint-Petersburg. The bridge is guarded by the Committee on State Control Use and Protection of Historical and Cultural Landmarks.