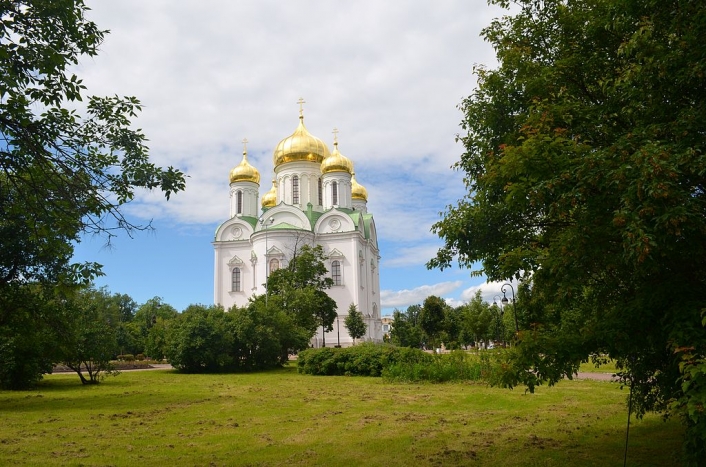 The construction of the main city church of Tsarskoye Selo began in 1835 under the supervision of architect Konstantin Ton. Supervised the construction work Y. V. Zakharzhevsky, General of the city. The consecration of the cathedral took place on November 24, 1840 in the presence of Emperor Nicholas I.

The Catherine’s Cathedral was conceived in the form of a Greek cross according to the type of central symmetry, the facades were facing the streets forming Cathedral Square. Towering 50 meters, the cathedral during its construction was the tallest building of Tsarskoye Selo. Catherine Cathedral could accommodate 2,000 people. The main altar of the temple with a five-tier iconostasis was elevated by five steps. Outside, the walls of the temple were plastered and whitewashed. In the upper part of the temple were bas-relief images of angels, and on the eastern side - the image of St. Catherine. Five gilded domes with crosses crowned the temple.

In 1862, the cathedral suffered from smoke and soot during a fire that destroyed the wooden Gostiny Dvor. Only the 1890s managed to restore the walls and gilding, as well as conduct internal repairs. In 1865, Y. V. Zakharzhevsky died and, as the first honorary citizen of Tsarskoye Selo, was buried in the cathedral. A plate with a commemorative inscription “from citizens” was on the western wall. Also in 1917, the priest John Kochurov, who was shot by the Red Army and was reckoned in 1992 with the host of holy martyrs and confessors of the 20th century, was buried in the cathedral.

In the 1930s, the cathedral was supposed to be closed, and its premises used for other purposes. However, later the presidium of the district council decided to demolish the temple because of the supposedly "bulky building" that overwhelmed the surrounding buildings. On the night of June 5, 1939 the cathedral was blown up.

In the postwar years, the former Cathedral Square is gradually cleared, and a square is formed on the site of the blown up church. April 22, 1960, on the 90th anniversary of the birth of V.I. Lenin, a monument was erected to the leader in the center of the square, actually on the foundation of the temple.

In 2006, the question of rebuilding the temple was raised, large-scale excavations began to study its foundation. In February 2007, an order to recreate the cathedral was signed by the Government of St. Petersburg. The funds allocated by the government were not enough, and many enterprises of the city, as well as private individuals, contributed to the reconstruction of the temple. In addition, more than 27 thousand Petersburgers contributed to the acquisition of the so-called registered brick.

On June 27, 2010, as part of the festivities dedicated to the 300th anniversary of Tsarskoye Selo, the consecration of the temple by Patriarch Kirill took place. Currently, Catherine’s Cathedral is an active Orthodox church.

Since 2014, a unique museum has been operating in the basement halls of the cathedral, which presents models of temples of the Tsarskoye Selo deanery, interesting artifacts found during excavations of the Catherine Cathedral, elements of its utensils. One of the main relics of the museum is the miraculously preserved cross, which was in the cathedral until its destruction. Entrance to the museum is free, but a donation to the temple is welcome.