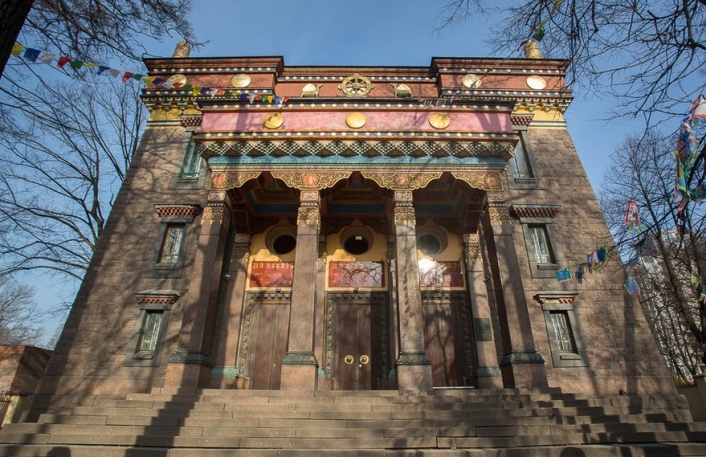 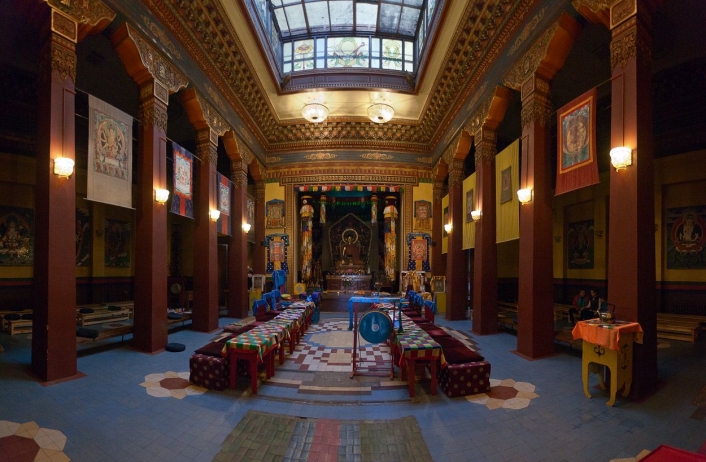 In 1908, the Ministry of Foreign Affairs of Russia received a petition from the Tibetan Dalai Lama for the construction of a Datsan in St. Petersburg. Scientists-orientalists supported the idea. In 1909 on the site acquired by the Buryat lama Aghvan Dorzhiev construction began. The funds were donated by Dorzhiev and XIII Dalai Lama and were gathered among the believers of the Republics of Buryatia and Kalmykia.

Datsan was built in accordance with the canons of Tibetan architecture. For the scientific management of the construction a committee of oriental scientists was established and for the decoration of the inner church Buddhist monk O. B. Budayev was invited to St. Petersburg. He took part in the painting of the central church according to the sketches of N. K.  Roerich.

The walls of the temple are faced with red and purple granite. The entablature made of red brick is trimmed with blue belts with white circles. Three-story building of the temple connects with a four-story tower from the north side. The tower is crowned with a complex copper gilded top called "ganchir". The temple also adorns the eight-degree circle  "harde" (a symbol of Buddhism) with copper figures of gazelles on the sides. In the corners of the main facade there are gilded cones – "chzhaltsans", which housed printed prayer texts. Inside the temple there are colored stained-glass windows, Buddhist symbols, multicolored floor tiles etc.

In 1968 the building was declared a monument of local architecture. In 1990 Datsan was handed over to Buddhists.