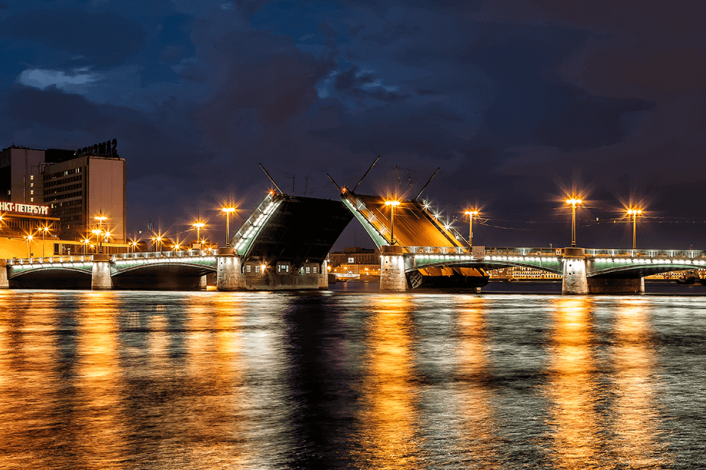 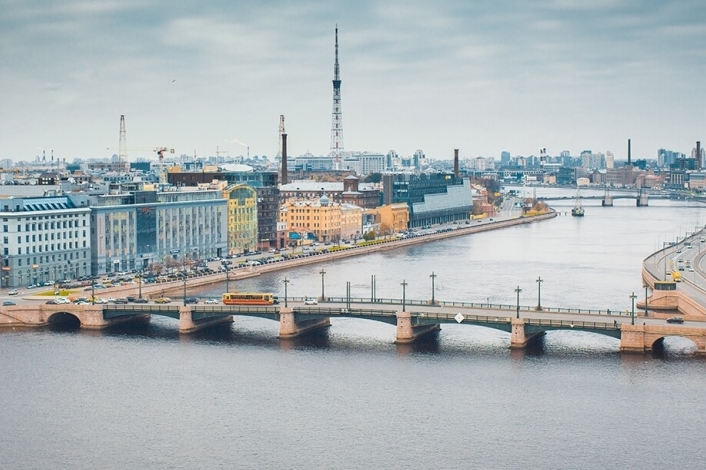 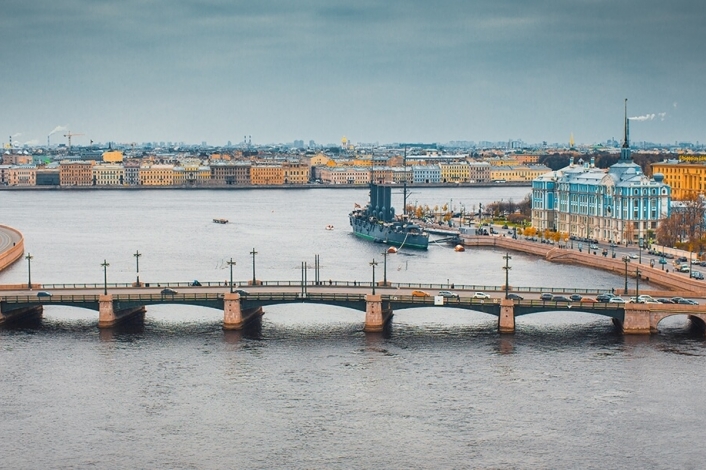 Sampsonievsky Bridge (formerly the Bridge of Freedom) across the Bolshaya Nevka is located in the alignment of Finlandsky Prospect and Kuibyshev Streets.

The bridge connects Vyborg Side and Petrograd Side. At the beginning of the XIX century, the floating Grenadiers bridge with a draw span which was located in the alignment of the Bratstva (Brotherhood) street was transferred to this place. The bridge was renamed there first in Vyborgsky Bridge, and then – Sampsonievsky Bridge - in memory of the victory over the Swedes at Poltava, on June 27 (Sampson day) 1709.

In 1847 a floating bridge was demolished and in its place a 13-span wooden bridge of complex mullion-strut system was built. It was one of the first bridges that replaced the pontoon ones.

In 1889 during the next major repair the draw span was transferred to the middle of the bridge, and the span number increased to 17.

In 1908 a temporary wooden detour bridge with an adjustable span the middle part was built; longitudinal axis of which was positioned downstream 65 meters from the existing one. Old wooden bridge was dismantled, but the permanent bridge could not be built. After the October Revolution, the bridge was renamed Svobody (Liberty) Bridge.

In 1937 wooden detour bridge was repaired with reinforcement of spans and supports. Wooden balks were replaced with metal beams, and in the draw span wooden lifting frames were replaced with metal spans. The bridge became raised by electromechanical drive. In 1955 the bypass Liberty Bridge was closed for motor and pedestrians traffic because of its unsatisfactory technical condition.

In 1955-1958, under the project of engineers V.V. Demchenko, B.B. Levin of Lengiproinzhproject and architects L.A. Noskov and V.A. Grushke, in the alignment of the Finlandsky Prospect and the Kuibyshev Street 7-span bridge with a central draw span was built. 5 spans are covered with metal superstructures, including draw one, and two symmetrically arranged shore spans – with concrete 2-hinged arches.

There is twin-leaf metal welded trunnion bascule span with fixed counterweights. It is raised using the drive.

According to its design and the system Liberty Bridge is similar to its predecessors – Kamennoostrovsky Bridge and Ushakovsky Bridge. It differs only in the presence of coastal reinforced concrete arches and pile foundation supports, as well as the presence of the granite arched stair descents to the water near the abutments.

Cast iron railing of the closely spaced straight rods joined by an original knot at the top with cast-iron bollards is installed on the bridge. Granite parapet is installed on all abutments, reinforced concrete arches and supports.

A new tram rails and waterproofing of the entire area of the bridge was made.