The Summer Palace of Peter I

Currently, the Summer Palace is under reconstruction and is closed for visiting 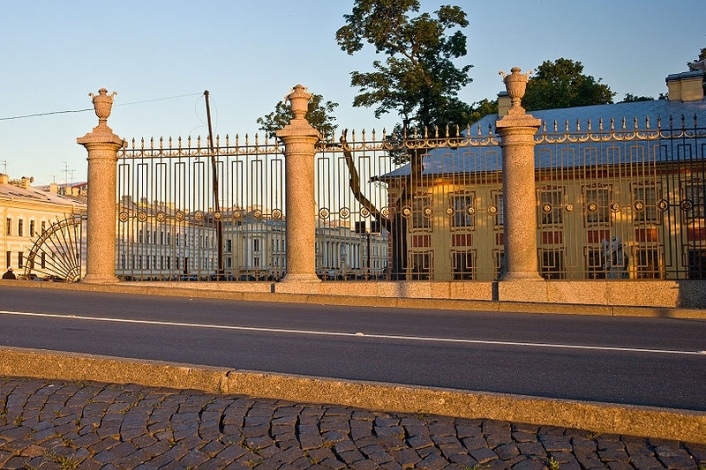 The Summer Palace of Peter I is the St. Petersburg’s Palace Museum, the summer residence of the imperial family. It was constructed according to the Domenico Trezzini‘sproject. The palace is located in the Summer Garden and is managed by the Russian Museum. Currently, the palace is closed for reconstruction.

The exterior of the Summer Palace is inconspicuous.  It is a simple two-story brick building in the Dutch style with the weather vane with George the Victorious rising on the roof. The main decoration of the facades of the building are unique bas-reliefs laid out in the technique of manual spread. However, this palace is one of the few buildings made from stone of the Peter’s epoch, which have survived to our days and reached us almost in its original form.

The summer residence of Peter was built in 1710-1712 on a small island, where the Fontanka river (then named by a simple name Bezymyanny Yerik) flows into the Neva River. At this point there used to be a wooden house where members of the royal family lived in the summer. The new stone residence of the king was surrounded by water from three sides. With the help of the sediment, water was pumped from the Neva River. The porch of the palace could also be reached by boat, so in the 18th century a small pier was built here.

Each floor of the residence had seven rooms, and there were no large ceremonial halls between them. Peter the Great occupied the ground floor, and the second floor was intended for his wife, children and their servants. The interiors of the Summer Palace are lavishly furnished with oak, some rooms are furnished with walnut tree. Oak finishing became a novelty. Prior to that this kind of wood was used primarily in shipbuilding.    The Green Room attracts wide attention. It is decorated with expensive sculpture and gilding. It may be also interesting to visit Peter's private cabinet and his Turning room where he spent a lot of time occupied with various crafts.

The museum history of the Summer Palace of Peter the Great began in 1903, when the first exhibition devoted to the 200th anniversary of St. Petersburg and the memory of the founder of the city was held here. In 1934 a historical and art museum, which later became a branch of the Russian Museum, was opened in Summer Palace.