Adults - 300 rubles., Students, cadets, students, pensioners - 100 rubles.
The day of free visit for individual visitors is the third Thursday of the month from September to April. 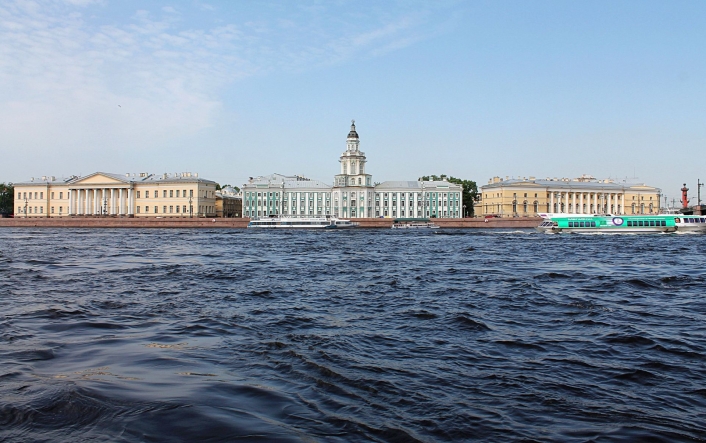 Kunstkammer was the first museum in Russia. Peter I created it with the intention of studying exhibits created by nature or human hands. The first exhibition was opened in 1714 and made a great impression on contemporaries. Two years before that, St. Petersburg had become the capital of Russia. Then a large collection of curiosities, gathered by Peter, was transported from Moscow to the northern capital, and the sovereign allocated a separate room for her.

The full name of the current museum is the Peter the Great Museum of Anthropology and Ethnography. It is located in a historic building on the University embankment, and its exhibits all kinds of everyday life utensils and culture of different nationalities. Throughout many years of the museum's existence, over one million unique specimens were collected. But the greatest glory of the Kunstkammer was brought by the Peter's collection of "freaks", various kinds of anomalies.

For many years Lomonosov, the founder of the Russian Academy of Sciences, worked here. Various instruments appeared in the museum, and the first astronomical observatory was opened in the Kunstkamera tower.

In 1747 a fire seriously damaged the building. The unique Gottorp globe, donated to Peter by the German Duke Carl Friedrich, and the armillary sphere (model of the solar system) crowning the Kunstkamera tower burned down. Both the globe and the sphere were later recreated, albeit in the 20th century.

In 1887, a new wing was added to the main building of the Kunstkammer, which no longer could host the large museum collection.

Nobody will remain indifferent after visiting the Kunstkamera. People with strong nerves will be surprised by the exhibits of the anatomical department. Fans of the East will be interested to see the samurai armor and admire porcelain figurines from China. In the Indian department, there are many mysterious masks and costumes, and for those who are fond of cold weapons - a collection of famous Indonesian daggers. You can also get acquainted with the life of North American Indians, take a look at the rituals of shamans, see the cultural objects of all the peoples of the world.

The visitors are also offered a unique cycle of programs: sightseeing tours, play classes for senior preschoolers and junior schoolchildren, "A lesson in the museum" for middle and high school students and a "routing" for single visitors.