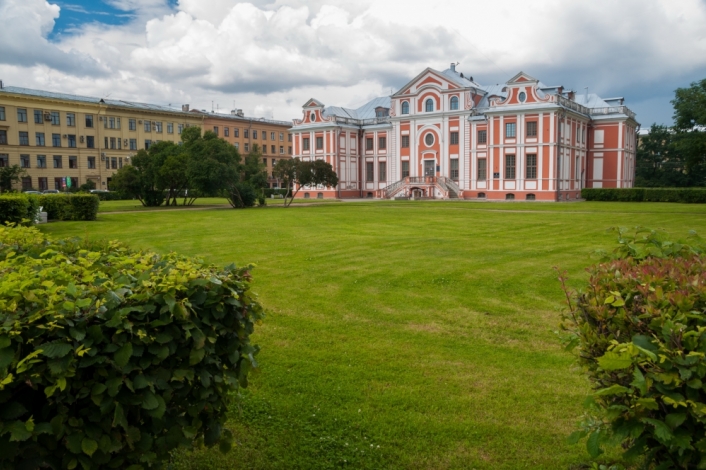 Kikini chambers were built in 1714-1720 according to the project of architect Andreas Schluter near the resinous yard. This is the only surviving house of admiral-adviser and one of the companions of Peter I - Alexander Kikin.

It is interesting that Kikin also owned a site in the center of the city where the Winter Palace is now located. In 1718 he was executed for organizing the escape of Tsarevich Alexei Petrovich from Russia, and his house was taken to the treasury. In 1719-1727 there was a collection of the Petrine Kunstkammer and the personal library of Peter the Great.

In the 1720s the Kikin’s House was rebuilt: the second floor was built up, the facades were decorated with pilasters. On the windows of the facade facing the Neva, figured platbands appeared. In 1733, architect B. Rastrelli erected a bell tower with a dome and a cross over the middle part of the chambers. The Chancellery houses the office, the infirmary and the church of the Life Guards Equestrian Regiment.

In the Kikiny chambers, the stylistic foundations of the "Petrine Baroque" were embodied. The building and its interior layout resemble the Great Peterhof Palace in its central part.

In 1829, the building was rebuilt again by the architect Alexander Staubert, the Baroque decor was destroyed.

During the Leningrad blockade, the Kikins were badly damaged, but in 1952-1956 they were rebuilt according to the design of the architect Irina Benoit in the original form.