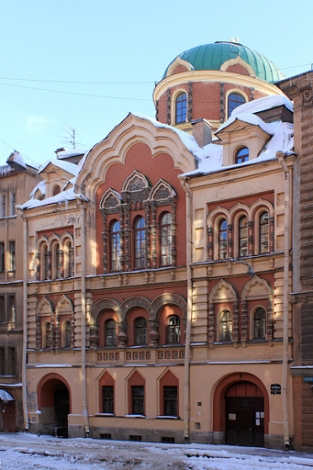 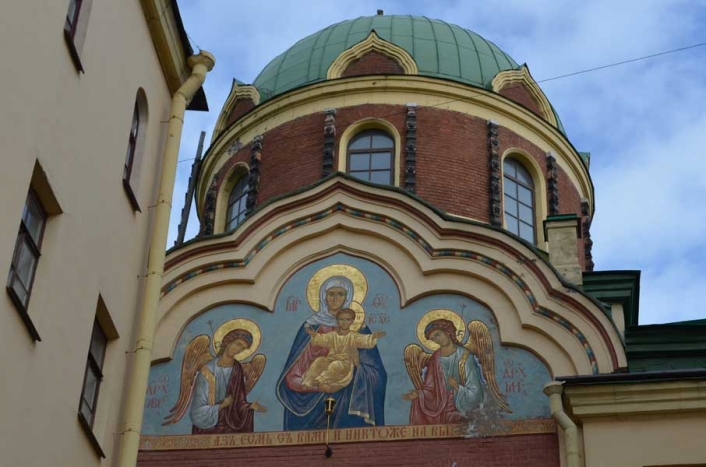 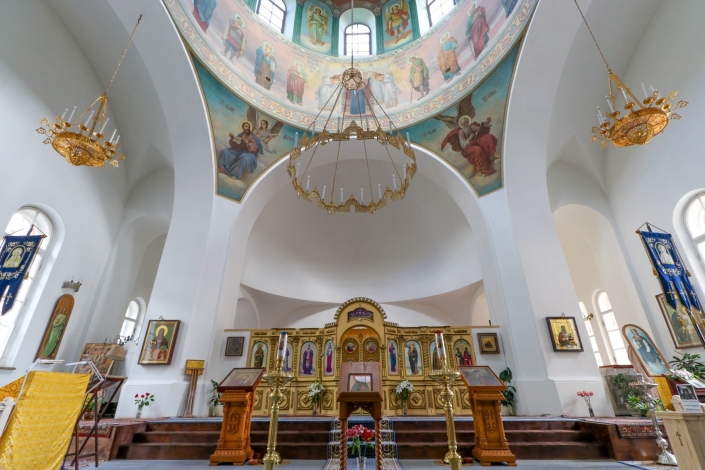 The compound of the Leushinsky St. John the Baptist convent of the Novgorod diocese was founded in St. Petersburg with the blessing of John of Kronstadt. In 1891, the site for it was acquired by the abbess of Leushinsky John the Baptist Monastery, Igumeniya Taisiya. The architectural design of the Compound was made by the architect Nikolai Nikonov, a famous master of the Russian-Byzantine style.

The three-story courtyard building is decorated in a decorative Neo-Russian style, in the spirit of the ancient Yaroslavl temples of the 17th century and is decorated with colorful ceramics. On the first floor there was a chapel, on the second - the abbess’s apartment, cells and the refectory, on the upper - a three-altered church for 1000 people.

The main church in the name of John the Theologian was consecrated on November 21, 1894 by Bishop Nikander of Narva. The consecration of the side chapel in the name of the Great Martyr Barbara took place on December 11, 1894. It was performed by the Archbishop of Novgorod and Starorussk Theognost. Third throne - sv. John of Kronstadt remained not consecrated until 1917 in anticipation of the canonization of Fr. John.

The icons were partly painted by the sisters of the monastery, educated at the Academy of Arts, some of the icons were donated. A three-tier iconostasis from a pear tree was carved by a craftsman from Pereslavl Zalessky. In 1908, a temple icon ordered from the courtyard was brought from Patmos Island. To date, murals in the dome of the temple have been preserved.

The facade of Leushinsky Compound, included in the continuous development of ul. Nekrasov stands out in her thanks to the diverse and sophisticated scenery in the neo-Russian style. Of particular interest are the curly platbands of the windows of the third floor of the church, which end with multi-blade decorative arches. The same motif, only larger, is repeated in the crowning kokoshnik of the temple. The three-story building is crowned with a dome on a cylindrical drum.

On June 11, 1931, the compound was closed. On February 18, 1932, the last Leushin nuns were arrested and sentenced to various terms of camps and deportation to Central Asia. In January 1938, the last rector of the Fr. Fedor Okunev.

The courtyard building was adapted for a residential building. After the war, a regional neuropsychiatric dispensary with medical and labor workshops entered the building.

The Temple of Leushinsky Compound was returned to the Church in July 2000. The shrines of the Leushinsky monastery, flooded by the waters of the Rybinsk reservoir in 1941-1946, returned to the temple. One of the main shrines is the remote Cross with the relics of St. John the Baptist. In August 2004, the image of the Mother of God “I am with you and no one else” appeared on the pediment of the church from the side of Ozerny Lane. In August 2007, the entire complex of Leushinsky Compound was transferred to the Church of St. John the Evangelist.