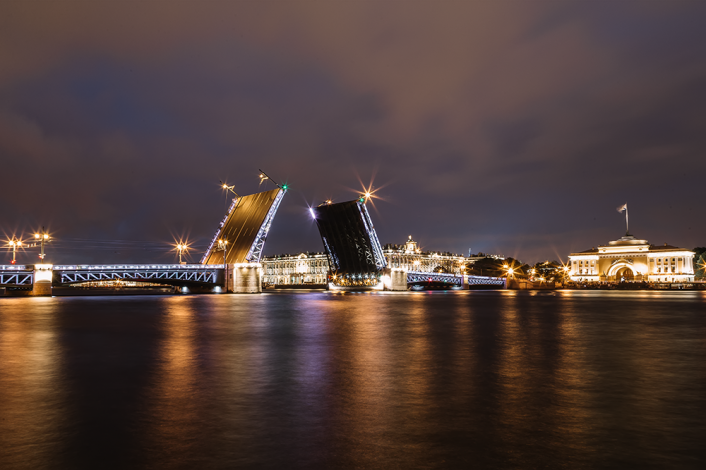 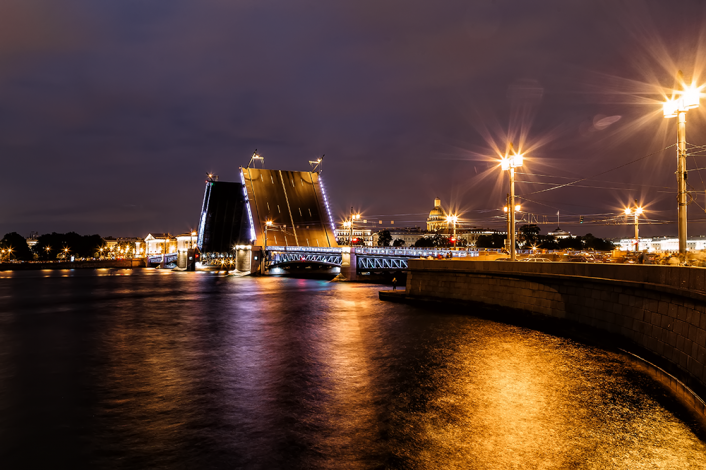 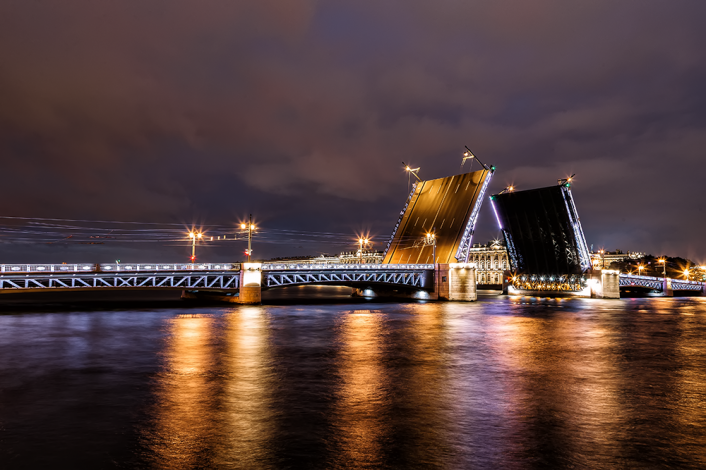 There was a boat transfer on the site of the present Palace Bridge long before it arrives. After the construction of permanent Blagoveschensky Bridge (opened in 1850), the St. Petersburg Exchange Committee appealed to the Tsar with a request to move Isaakievsky pontoon bridge connecting before Universitetskaya Embankment and Senatskaya Square to the Winter Palace. This moving of Isaakievsky Bridge allows creating a transport artery, which could serve the offices of the Commercial port located on Vasilyevsky Island.

Resolution for the bridge movement was received on August 5, 1853. The reconstruction project was prepared by an engineer I.K. Gerard. All work was completed by December 10, 1856. The crossing was given a new name - Palace Bridge, as it led to the Winter Palace and Palace Embankment.

The need for the construction of a permanent bridge across the Neva River between Admiralteiskaya Embankment and Universitetskaya Embankment appeared also in the XIX century. In 1882 non-governmental organizations appealed to the administrative board of the City with a request to replace pontoon Palace Bridge. But St. Petersburg authorities have not decided on the start of construction at the time.

Construction of permanent Palace Bridge was started in 1912, but due to the beginning of the First World War, its construction was completed in 1916 with no architectural finishes.

It was a 5-span metal bridge with a central draw span. Fixed spans are covered with 2-span metal riveted trusses of a continuous girder system, with curved chords.

In 1932-1933 Lengorispolkom announced a competition for the architectural design of the bridge. In 1939, under the project of architect L.A. Noskov wooden railing was replaced by a cast iron one with a simple pattern.

During the Great Patriotic War near the left bank support of the draw span bomb exploded that damaged the facing and masonry of the support, with the result that water filtration in wells increased. 10 years after the end of the War (in 1956-1957) wooden parapets on the abutments and intermediate supports were replaced by granite ones.

Due to the size of the draw span openings (56.6 m) and the mechanisms complexity, Palace Bridge is one of the most significant buildings, not only in Russia but also worldwide. However, during inspection of the draw span in 1938, 1950, 1958 by the Leningrad Institute of Railway Engineers, it was found that the axes of rotation of the leaves at wedging block operation are not fully discharged. These difficulties are directly connected to the system providing the draw span operation in directed position, according to the three-hinged arch scheme.

Over the past 40 years various repairs were carried out on the bridge.

Thus, in 1976-1978, under the project of Lengiprotransmost and Lengiproinzhproject modernization of the draw span of Palace Bridge was made.

In 1991-1994 major repair of the underwater part of the draw span supports was carried out. And in 1998, the work on dismantling of tram tracks was performed.

By 2008 Palace Bridge has exceeded its life cycle. However, its major repair at that time was postponed until the construction of a new bridge on Vasilevsky Island across Serny Island.