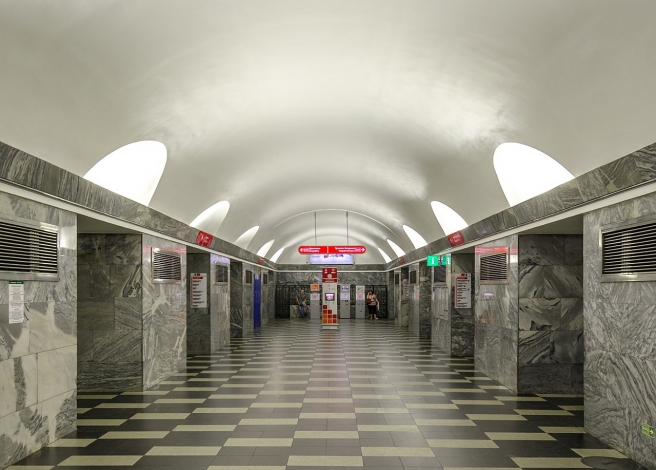 The station of the 1st (Kirovsk-Vyborg, Red) line was built on June 1, 1958, and began work on September 1 of that year, after commissioning of the section of the second metro line, Ploshchad Vosstaniya - Ploshchad Lenina. The station is named after the avenue of the same name, bearing the name of the Russian philosopher, writer and literary critic Nikolai Chernyshevsky.

On the site of the station lobby there was previously the Nikolaev Guards almshouse, designed by architect N. A. Arkhangelsky and the Church of Saints Cosmas and Damian of the Life Guards Sapper Battalion.

The station pavilion is made in a concise "Khrushchev" style, designed by architects A.S. Getzkina and V.P. Shuvalova. This is a high pentahedron with a large stained-glass window on the main facade. The lobby is decorated with a relief with a portrait of Chernyshevsky. The underground hall, also designed strictly and functionally, was designed by architects A.V. Zhuk and S.G. Mayofisa.

"Chernyshevskaya" is one of the deepest metro stations in the world, like the previous one - "Lenin Square", because the tunnel connecting them passes under the deepest place of the Neva. The height of the escalators is 65.8 meters, the length of the inclined part is 131.6 meters, the number of steps is 755. The passage from Lenin Square to Chernyshevskaya was the first in Leningrad to pass under the Neva.

From the Chernyshevskaya station, you can walk to the Tauride Garden in 10 minutes.