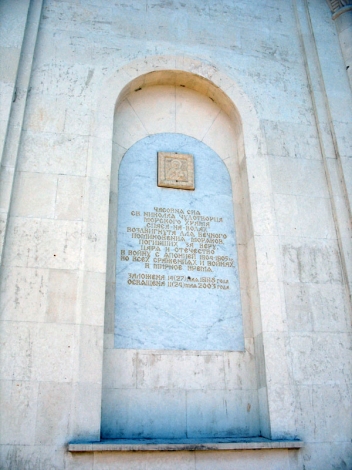 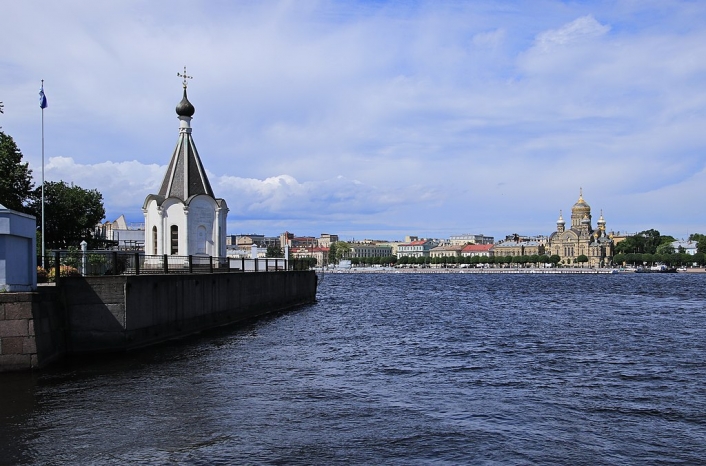 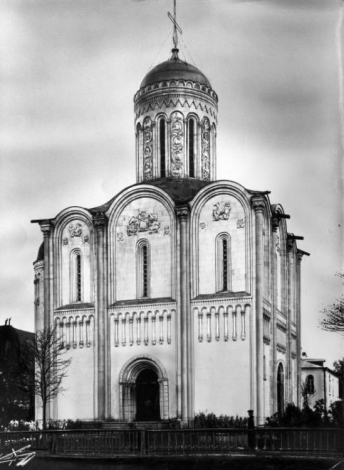 On May 28, 1910, on the English Embankment near the Novoadmiralteisky Canal, the Church of the Savior on the Waters was laid in memory of the Russian sailors who died in the Russo-Japanese War of 1904-1905. The place for the temple was chosen not far from the shipyards of the Novo-Admiralteyskiy plant, where the ships of the Russian fleet were born.

The laying ceremony of the church took place on the anniversary of the Tsushima battle. It was conducted by the Bishop of Vologda Nikon (Rozhdestvensky) with a procession from the St. Nicholas Naval Cathedral. In the foundation stone, the Grand Duchess Olga Konstantinovna laid the soldier's St.George cross.

The temple was built according to the project of the architect Marian Peretyatkovich, who took the ancient Orthodox churches of the 12th century as a model. Outwardly, it partly resembled the Church of the Intercession on the Nerl. Lined with white stone, the temple looked very beautiful from the Neva, closing the perspective of the embankment.

The temple consisted of the lower temple in the name of St. Nicholas the Wonderworker and the upper one in the name of the Gethsemane struggle of Christ the Savior. Inside, on bronze plaques, the names of sailors who died during the war were engraved - all twelve thousand names, from Admiral Makarov to the last sailor. Above each board was inscribed the name of the ship and the battle with its participation. In the upper church, on the altar wall, there was a mosaic "The Savior Walking on the Waters", executed according to a sketch by Nikolai Bruni. Two mosaic icons on the pillars were made according to sketches by artists Viktor Vasnetsov and Nikolai Bruni. The people called the temple “Savior on the Waters”.

The solemn consecration of the temple took place (July 31) on August 13, 1911 in the presence of Nicholas II and members of the imperial family.

On March 8, 1932, the temple was closed and soon blown up despite thousands of collected signatures. Parish and some of the parishioners were repressed.

In 1990, the Committee for the Restoration of the Church of the Savior-on-Water was created. But due to the fact that the production building of the Admiralty Shipyards stands on part of the foundation of the church today, it was decided at the first stage to build a chapel, which in the future will have to be organically combined with the revived church. The project for the restoration of the church and the construction of the chapel was developed by the architect D. A. Butyrin.

The chapel was founded on May 27, 1998. Four years later, a cross was solemnly raised on it, which repeats the outlines of the cross that crowned the Savior on the Waters at the beginning of the 20th century: stylized steering wheel and anchors were used in the silhouette. On May 24, 2003, the solemn consecration of the chapel in the name of St. Nicholas the Wonderworker took place.

Currently, memorial services for the dead sailors are regularly performed in the chapel.