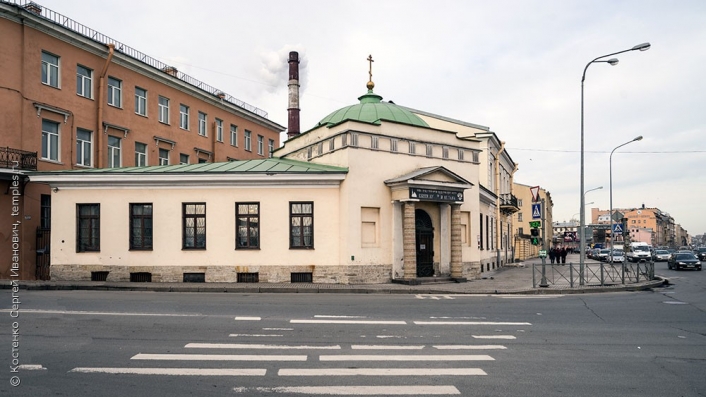 The chapel in honor of the icon of the Mother of God "All Who Sorrow Joy" is part of the historical courtyard of the Valaam Monastery on Sinopskaya Embankment.

The chapel was built in 1832-1834 according to the project of the architect, academician Adrian Ivanovich Ochakov. The strict square building of the chapel is decorated with a Doric portal with two columns, an attic and a flat dome. On both sides adjoined the room with cells, where the monks lived, organizing pilgrimages to Valaam on ships.

The chapel was originally consecrated in 1834 in the name of St. Nicholas of Myra, the patron saint of all travelers on the waters.

In 1929 the temple was closed. The buildings of the cells housed various government institutions, and the premises of the chapel itself for a long time was a wineglass. Only in 1994, the chapel was returned to the Valaam monastery and consecrated in the name of the icon of the Mother of God “Joy of All Who Sorrow”.

The restoration of the building and the interiors of the chapel was fully completed in 2013.