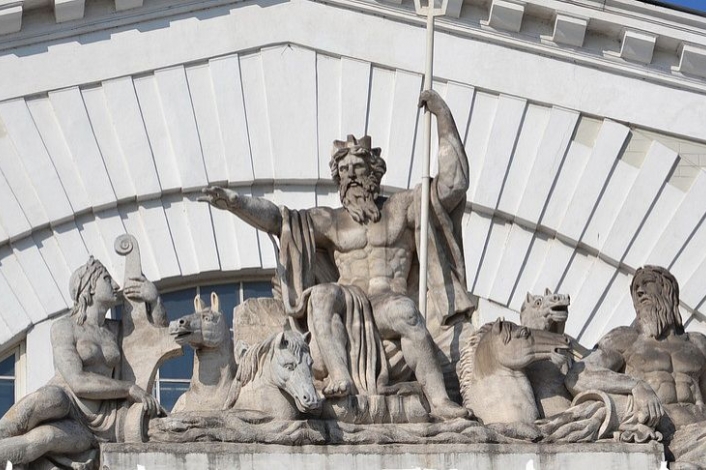 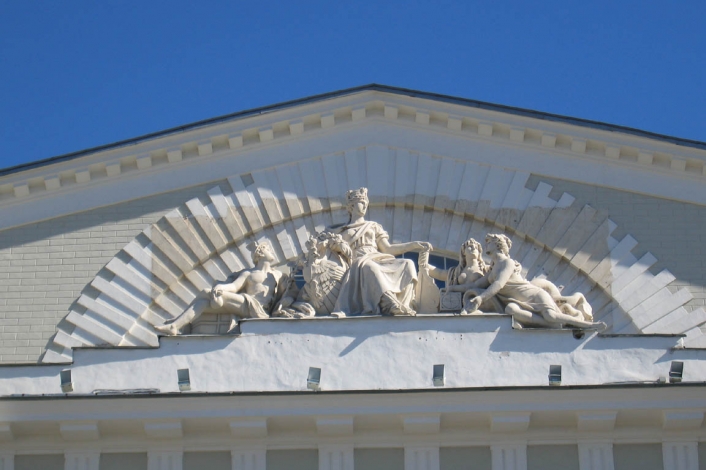 The first building of the Stock Exchange on Strelka of the Vasilievsky Island was built in 1781-1787 according to the project of J. Quarenghi. However, the Exchange did not open there, the building began to deteriorate and was demolished.

The new project of the Stock Exchange was developed by the French architect J.F. Toma de Tomon. The majestic construction on Strelka of Vasilievsky Island was started in 1804. The construction was delayed because of the war with Napoleon, and the opening of the Exchange took place in the summer of 1816.

The two-storeyed building of the Exchange with huge half-glazed windows is surrounded by a grandiose colonnade of the Doric Order. The building was erected in the style of the temples of Ancient Greece and is located on a stylobate - a high stone platform. To the entrance, there are wide solemn staircases and gentle ramps.

Connection of the Exchange building with trade and water element is emphasized by sculptural groups that are made by the famous master Samson Sukhanov. The facade is decorated with the sculpture "Neptune with two rivers": the god of the seas Neptune in the crown and with a trident in his left hand solemnly drives a chariot drawn by four seahorses into the waters of the Neva, next to Neptune two figures: to the left - a female figure personifying the Neva, on the right - a male figure, symbolizing the Volkhov River.

On the opposite side of the Exchange - a sculptural group "Navigation with Mercury and two rivers." In front of the building, the architect installed two rostral columns with sculptures of sea gods.

From 1940 to 2014, the Central Naval Museum was placed in the Exchange building, then it was transferred to the State Hermitage. After the restoration of the building in 2020-2021, it is planned to house the Heraldry Museum there.