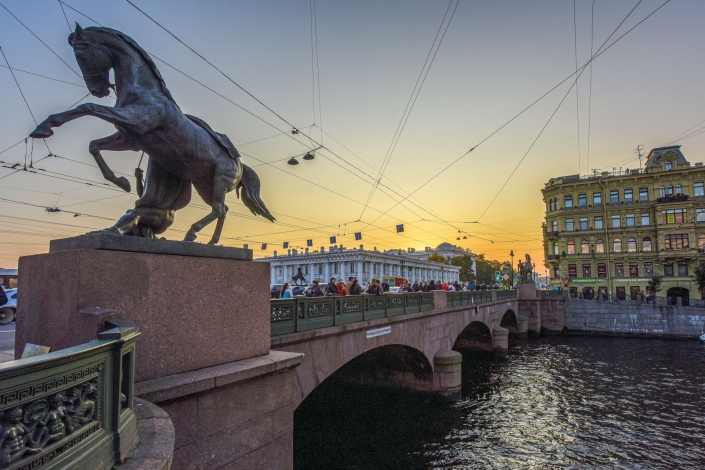 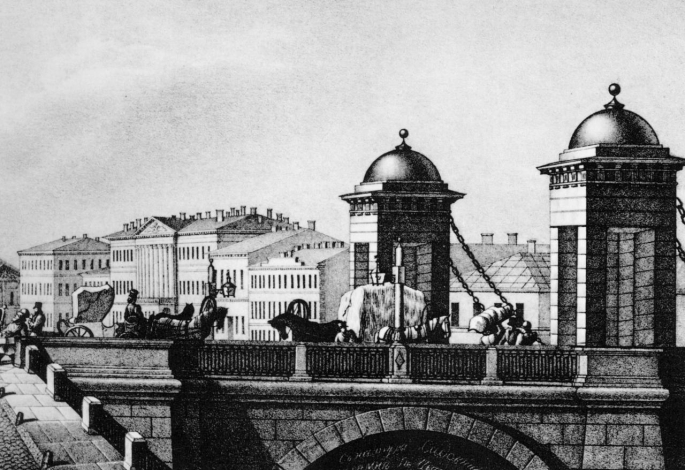 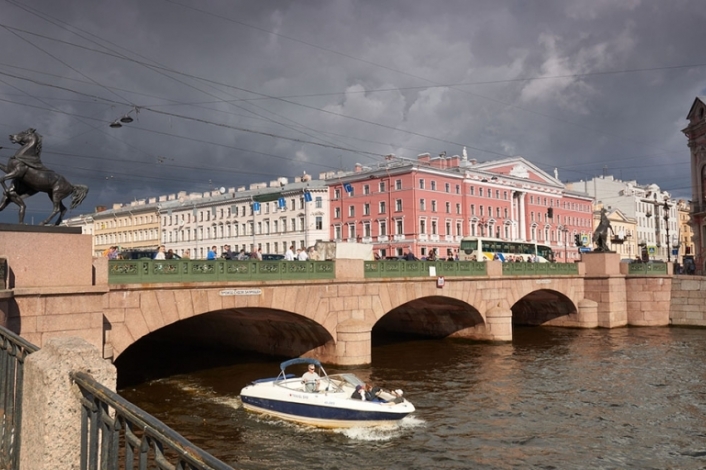 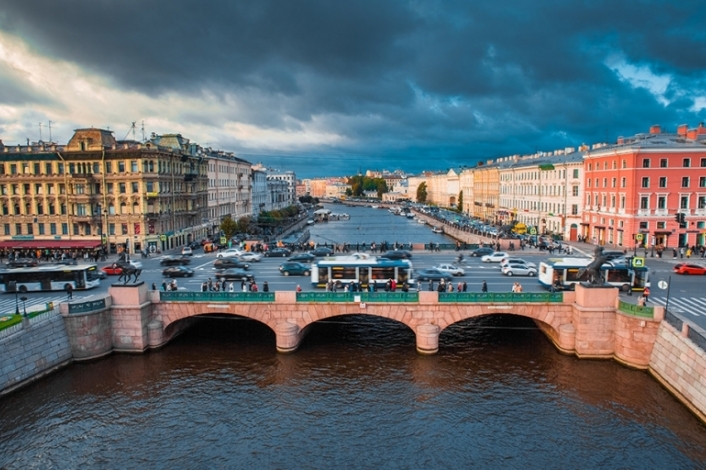 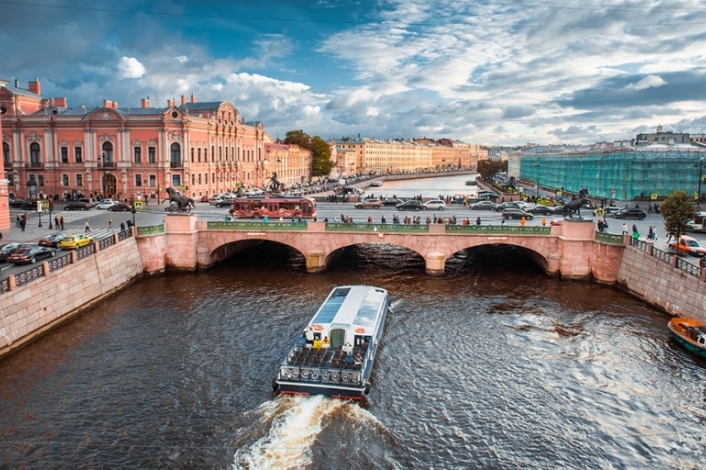 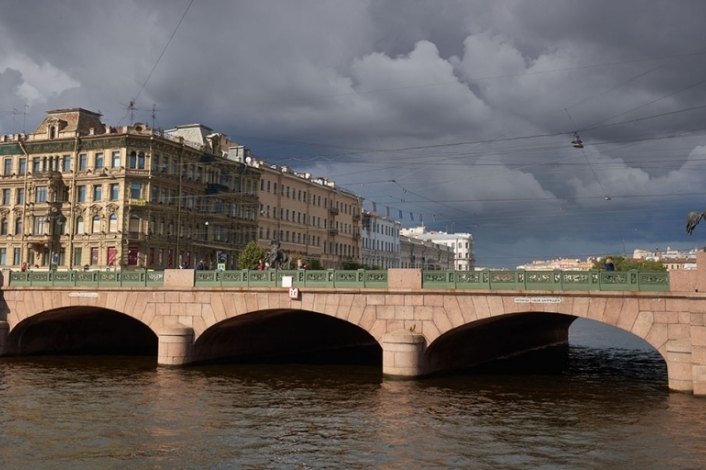 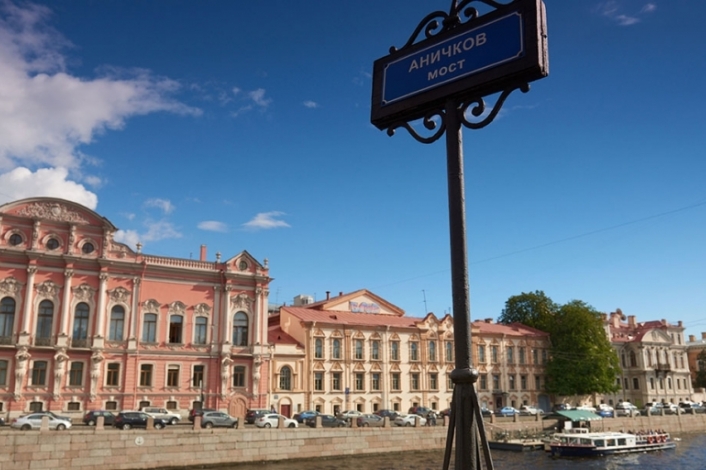 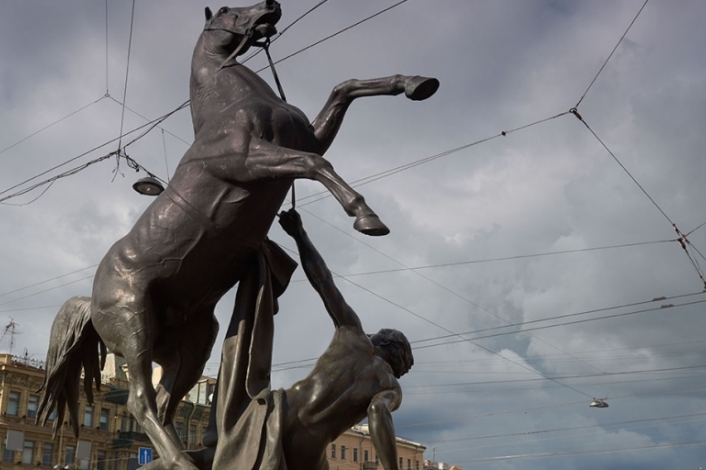 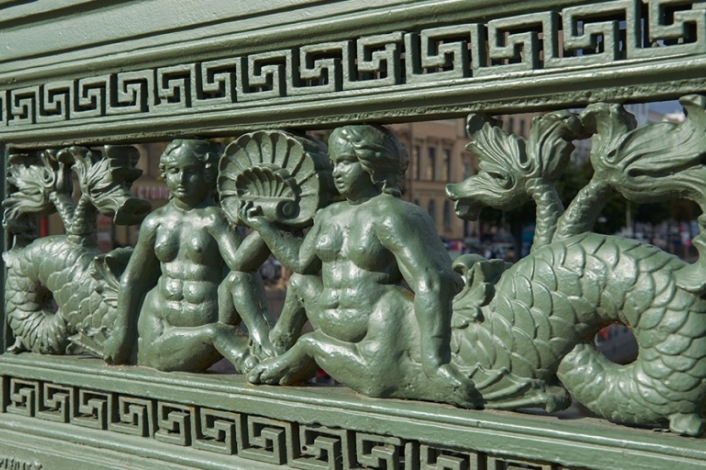 Anichkov (former Nevsky 1739-1747) bridge is located in line with the Nevsky Prospekt, originated in 1711. In those days it was a large tract on which the baggage trains moved to the City. It was the first corduroy road in St. Petersburg, which was called the "Bolshaya pershpektiva". Along with laying the road, in 1715, Peter the Great issued a decree: "To make a bridge for the great Neva River along the ‘pershpektive’ across the Fontanka River." The bridge was named after its builder engineer lieutenant colonel M.O. Anichkov. It was the first timber bridge across the Fontanka River with the length of about 150 m, and its width allows passing only one vehicle. The supports of the bridge were piled.

In 1721 the bridge was rebuilt under the direction of Hermann von Boles as timber bridge, but with a lifting deck for the passage of small boats and barges. The bridge consisted of 18 arches and a lifting deck. In 1741, the bridge was reinforced to pass over it of 14 elephants - Indian gift of the Shah of Persia to the Russian Empress.

In 1749 the bridge was rebuilt again with the removal of the lift deck. The facade of the bridge was covered with boards and decorated as a granite stone with painting under rustic stone.

In 1785 three-span timber bridge with an average draw span and towers on the piers of the type of Staro-Kalinkin Bridge and Lomonosov Bridge. Shore spans were covered by stone arches. The average span was covered by a timber beam.

In 1841 the bridge was rebuilt again under the project of engineer I.F. Buttats and architect A.P. Bryullov. Old narrow bridge was destroyed and three-span stone bridge with slope brick arches rounded by elliptic curves was built on its place. The facades were faced with granite. Iron cast railing of highly artistic cast with motives of seahorses and mermaids is installed on the bridge. (A copy of the railing of Palace Bridge across the Spree River in Berlin, which was built by architect K.F. Schinkel). In 1841-1850s, on the granite monumental pedestals and the abutments of the bridge four artistic groups "The Horses Tamers" designed by P.K. Klodt were installed.

In the first years of the bridge operation strains in the arches were found, it was decided to monitor fractures. In 1843 the arches of the bridge were reinforced. By 1902 these deformations in the bearing elements have reached dangerous dimensions. Their appearance was explained by the unreliable connection of different materials, rigid granite cladding with easily compressible masonry of the arch and unreliable insulation. Water flowed into the junctions of dissimilar stone materials; and arches were destroyed under the influence of cold, wind, etc.

In 1907-1908s, in connection with the construction of tram lines the bridge was reconstructed under the guidance of P.V. Shchusev who first performed reconstruction of arches by sections, leaving joints unfilled.

In 1941 the sculptural groups of the horses were removed from their pedestals and buried in the garden of the Palace of Pioneers. On May 1st, 1945 sculptural groups were again installed on pedestals of the bridge. Granite pedestals and cast iron railings damaged during the war have been the ‘silent witnesses’ of the heroic defense of the city. A bronze plaque with the inscription mounted on one of the pedestals in December 1972 reminds us about it.